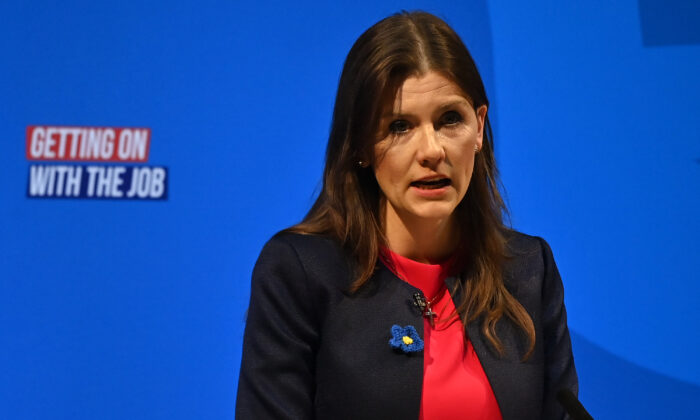 A female British minister has rejected calls for the Conservative Party to have an all-women shortlist for an upcoming by-election, calling such moves “demeaning.”

A by-election will be held to replace Neil Parish, the Conservative MP for Tiverton and Honiton, who resigned on April 30 after admitting to watching pornography on his mobile phone in the House of Commons.

Some Conservatives—including Caroline Nokes, the chairwoman of the Commons Women and Equalities Committee—have called on the party to ensure its candidate in the by-election is a woman.

Party chairman Oliver Dowden also said at the weekend he wanted the Conservatives to ensure more female MPs were elected so that the party in Parliament “reflects the wider country.”

But Michelle Donelan, the universities minister, said she did not support all-women shortlists, adding that the best way to get more women into Parliament was by encouragement and breaking down barriers.

“We don’t do it by putting in quotas which I find quite demeaning to women. Women can get there on merit,” she told Sky News, citing the examples set by former Conservative prime ministers Margaret Thatcher and Theresa May.

She added that current Home Secretary Priti Patel and Foreign Secretary Liz Truss are both female leaders who “got there on merit.”

The revelations of Parish’s inappropriate actions sparked renewed calls for a clampdown on unacceptable behaviour in Parliament, particularly toward women.

Donelan said that while she had not been subjected to sexist treatment herself during her seven years as an MP, it was “horrific and alarming” to see so many reports.

Over the weekend, Commons Speaker Sir Lindsay Hoyle called for a “radical” reform of working practices in the Houses of Parliament.

In an attempt to address a series of “serious allegations” of bullying and misconduct, he suggested staff should no longer be employed by the parliamentarians they work for, and should instead be employed by a new outside body.

Others have called for action to tackle a drinking culture in Parliament, where alcohol is widely available at its numerous bars and restaurants.

Donelan, however, said this should not be considered an “excuse” for unacceptable behaviour.

“Are we literally saying that people can’t go and have a drink and then behave themselves? Because that is a damning indictment,” she told Times Radio.