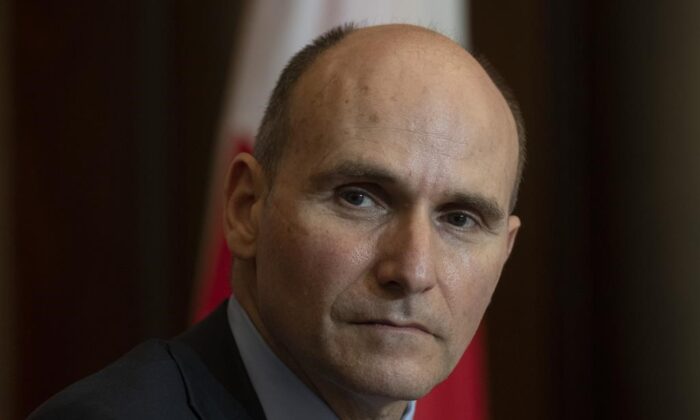 Health Minister Jean-Yves Duclos is seen during a news conference, on Feb. 15, 2022 in Ottawa. (The Canadian Press/Adrian Wyld)
Canada

On March 21, opposition members of the House of Commons health committee hammered the minister with questions about a timeline, a benchmark, or a set of conditions that would lead to the end of COVID-19 vaccine requirements.

“When we’re provided, as Canadians, with the solution—that was to get vaccinated—Canadians got vaccinated; when they were told to get boosters, they’re getting boosters; they were told to wear masks, they’re wearing masks. All they’re asking for, every single day, is what is it going to take for us to see the mandates end?”

The decision, Duclos said, will be based on everything from the number of deaths, infections, and hospitalization rates, to domestic and international epidemiological factors.

When asked what specific metrics could be used to decide when it’s safe enough to call down the federal mandates, he didn’t give a direct answer, offering a list of different numbers instead.

He said there were around 20,000 new cases of COVID-19 across the country yesterday, and estimated a 10 to 30 percent rate of infected people developing “Long COVID,” which refers to COVID-19 patients who develop a wide range of persistent symptoms that last for many months. He noted that the economic and social costs of Long COVID were also taken into consideration.

“Are you suggesting that post-acute COVID syndrome is the reason why we will continue federal mandates and keep federal employees off work?” Conservative MP Stephen Ellis asked the minister.

Duclos didn’t answer directly, saying 59 people died from the virus in Canada the day prior on March 20. He also told the committee that $23,000 is the average cost to treat a patient with COVID-19 in the hospital, that less than 60 percent of eligible Canadians have received a booster vaccine.

“It gives you an example of the type of numbers, people, and facts that we need to consider,” he said.

While mandates are reviewed on a weekly basis, he said these factors could not be reduced to just one number that could indicate it’s time to end the federal mandates, and said it would be “irresponsible” to answer whether there is a specific plan to do so.

“There are many different indicators, and that’s what we look at—a broad range of indicators… it’s a bit complicated. It would be simpler if we had only one indicator, but we look at a range of possible benefits and costs to the different policies that we’re using,” Duclos said.

When pressed if the government can set a benchmark for each of the factors, ticking them off one at a time, and lifting the mandates when all the criteria are met, the minister only pointed to the backlog of 700,000 surgeries delayed during the COVID-19 pandemic, saying that Canada’s hospitals have yet the ability to start recovering from the backlog.

The federal Chief Public Health Officer Dr. Theresa Tam also told the committee that the COVID-19 situation in the country is “unstable.” While she does not ultimately make decisions about federal mandates, Tam said the government is waiting to see whether there is a resurgence in the coming weeks and how provincial health systems are able to handle it.

Opposition parties have increasingly called for more transparency about how the federal government makes public health decisions about pandemic measures under its jurisdiction.

“We’ve heard both from [Duclos] and Dr. Tam that the answer to why federal mandates continue is complicated,” Ellis told the committee.

“I find that quite shocking, that there’s not an answer to be given—that it’s much too complex for the health committee and for Canadians to understand.”