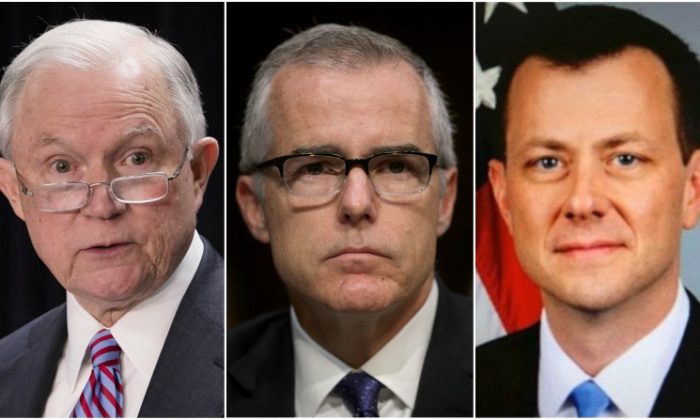 Attorney General Jeff Sessions fired FBI Deputy Director Andrew McCabe late on Friday, March 16, for authorizing an anti-Trump FBI official to leak to the press and repeatedly lying about it under oath.

The inspector general at the Justice Department reported McCabe’s alleged misconduct to the FBI. The agency then conducted an investigation which “concluded that Mr. McCabe had made an unauthorized disclosure to the news media and lacked candor − including under oath − on multiple occasions,” Sessions wrote in a statement.

One of these two officials was almost certainly Lisa Page, a senior FBI attorney, according to text messages between Page and top FBI counterintelligence official Peter Strzok released in January this year by Sen. Chuck Grassley (R-Iowa).

In the text messages, Strzok and Page mention Barrett by name in a conversation on Oct. 28, 2016.

“Still on with devlin. Mike’s phone is ON FIRE,” Page texted to Strzok.

“You may wanna tell Devlin he should turn on CNN, there’s news going on ; (,” Strzok replied.

At 5:36 p.m., two minutes after the couple’s exchange, Barrett sent out a tweet about the email investigation referring to “sources.”

Hours later, the couple discussed that news was breaking about the discovery of Hillary Clinton emails on the laptop of now-imprisoned convicted felon Anthony Weiner, the husband of Clinton aide Huma Abedin.

Late night on the same day, Page texted Strzok that she received a call from then-FBI Chief of Staff James Rybicki, who told her that: “He very clearly 100% believes that Andy should be recused because of the ‘perception.'”

The “Andy” is in reference to McCabe and “the perception” likely refers to the fact that McCabe’s wife received a $467,500 campaign donation from long-term Clinton backer and Clinton Foundation board member Terry McAuliffe. That donation took place while McCabe was investigating Clinton’s use of a private email server.

Early the next morning, Strzok mentioned McAuliffe by name in another text, though the context is unclear because he refers to an email.

The day after, Wall Street Journal published an article by Barrett which features extensive reporting on internal deliberations at the FBI about the probe into Clinton’s use of an email server and a separate investigation into the Clinton Foundation and the connection to McAuliffe. In that story, Barrett also cited “sources.”

In an interview with ABC after his firing, McCabe said that he was authorized to release information to the press.

“The decision to share information with the media is absolutely within my authority as deputy director,” McCabe said. “I am one of three people in the FBI who has the independent authority to make that decision. People could disagree about the decisions I made … but the fact is this is not a leak.”

Page and Strzok entered the media spotlight after their text messages became public. Upon learning of the texts, Special Counsel Robert Mueller removed Strzok from the probe into allegations of collusion between the Trump campaign and Russia.

The text messages showed that both Page and Strzok had an intense bias against President Donald Trump. The pair also discussed an “insurance policy” in case Trump won and a “secret society” meeting.