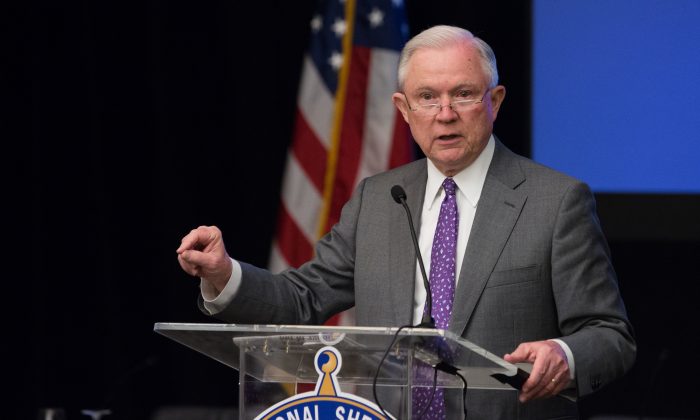 WASHINGTON—Attorney General Jeff Sessions filed a request to modify the Flores Settlement Agreement on June 21, a day after the president signed an executive order instructing him to do so.

The Clinton-era Flores agreement is the court ruling behind many of the family separations at the southwest border that have caused a furor among politicians and the media.

Sessions wants to amend part of the agreement so that Immigration and Customs Enforcement (ICE) can detain families together in ICE family residential facilities.

Beyond that, the administration wants to amend the provision of the agreement that prevents ICE from detaining families together for more than 20 days.

It takes a median of 40 days to complete an immigration case when the aliens are detained, according to the Department of Justice.

“It is not possible for the U.S. government to detain families together during the pendency of their immigration proceedings. It cannot be done,” states the filing.

One major reason that families decide to “make the dangerous journey to illegally enter the United States is that they expect to be released from custody,” the filing said.

Half a million illegal immigrants’ families and minors from Central America have been released into the United States since 2014 as a result of such catch-and-release loopholes, the White House said.

Most illegal immigrants from Central America claim “credible fear” when they are apprehended, which is the precursor to an asylum claim. Most enter either as family units or as unaccompanied minors.

Many who claim credible fear at the border disappear into the United States and do not show up for their subsequent immigration hearing. And of those who do, only about 20 percent are granted asylum once the case is heard by an immigration court.

Ninety percent of removal orders for unaccompanied minors were issued because the minors failed to show up for their hearing, according to the Department of Justice.

A judge ruling is the next step in the Flores case.