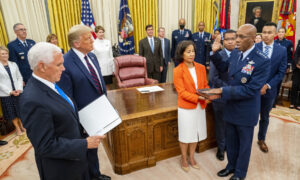 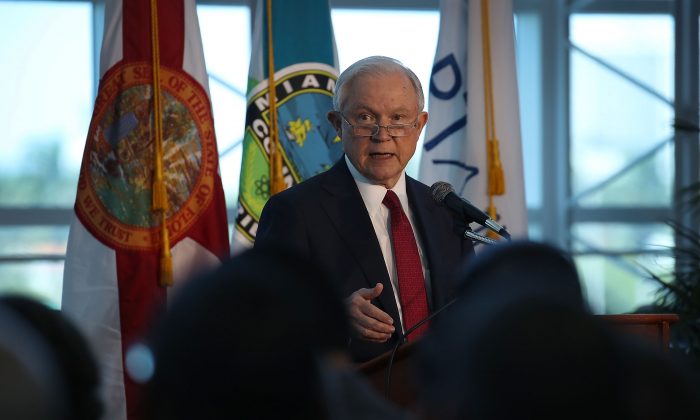 “It’s time to support our police, to protect our families, and to save American lives,” Trump said in a statement on Aug. 16.

The administration has been trying to halt cities and jurisdictions from enacting sanctuary policies, which usually shield convicted criminals who are in the country illegally from federal immigration authorities.

In a blistering speech against sanctuary cities, Sessions singled out Chicago and blasted its leaders for not cooperating with Immigration and Customs Enforcement (ICE).

“Respect for the rule of law has broken down. In Chicago, the so-called ‘sanctuary’ policies are just one sad example,” Sessions said in a speech in Miami on Aug. 16. Miami-Dade County reversed its sanctuary policies in February, soon after Trump took office and issued an executive order stating his intention to clamp down on sanctuaries.

“Here’s how it works right now: After the police arrest an illegal alien and charge him with a crime, they fingerprint and book him into their jail,” Sessions said in his prepared remarks.

“When federal immigration authorities learn that this criminal alien is in Chicago’s custody, they can issue an arrest warrant and ask the city to either notify them before the criminal is released or to transfer him to federal custody.

“But Chicago’s leaders have made this a political issue and direct their police to refuse both requests. Instead, the police are forced to release the criminal alien back into the community without regard to the seriousness of the crime or how long the rap sheet.”

Sessions recounted the case of an illegal alien convicted of aggravated domestic battery in Cook County, Illinois (where Chicago is located). ICE lodged an immigration detainer, but the county did not honor it. Once he was released, the man went on to murder a 15-year-old girl and shot her mother.

“She was only 15, and she could be alive today if Chicago’s leadership had prioritized her safety over politics,” Sessions said.

“Sadly, we know Chicago isn’t alone. Just three weeks ago, Sergio Jose Martinez was arrested in Portland, Oregon. Martinez is an illegal alien who has been deported at least 20 times, and police reports show that he was arrested at least 10 times just this year—accused of everything from possessing drugs to stealing a car.”

Sessions said immigration authorities had lodged a detainer requesting to be notified when Martinez was released.

The detainer was refused.

“According to allegations, Martinez then broke into the home of a 65-year-old Portland woman by crawling through her bedroom window,” Sessions said.

“Once inside, he reportedly forced this woman to the ground, used scarves and socks to blindfold, bind, and gag her, and then raped her and slammed her head into the wooden floor.

“How can these politicians hear this story and do nothing?”

Sessions announced in late July that he is starting to tighten the eligibility criteria for awarding federal dollars to cities that are not compliant with immigration authorities.

“We cannot continue giving federal taxpayer money to cities that actively undermine the safety and efficacy of federal law enforcement and actively frustrate efforts to reduce crime in their cities,” he said.

“The problem is these sanctuary jurisdictions tie our police officers’ hands and endanger federal immigration officers as well when they are forced to pursue these criminal aliens outside of the jails and prisons.”

Sessions said no evidence supports the claim that sanctuary policies help reduce crime by encouraging illegal aliens to report it when it happens.

“To the contrary, Chicago has consistently had one of the lowest murder investigation clearance rates in the country,” Sessions said, adding that a suspect is identified in only one of every four murders.

“Far from making Chicago safer, these policies likely make cooperation with law enforcement more difficult: If there are no real consequences for the criminal, no witness will risk their life to report the crime. That means criminals walk free and victims suffer in silence,” he said.

Matthew Albence, executive associate director of ICE’s Enforcement and Removal Operations (ERO), said jails are where his agency identifies the lion’s share of gang members and other criminals.

“There are some major cities where I can’t even send my officers to go into the jails to interview someone who has been arrested for gang activity or is a known gang member. Certainly that’s a problem,” Albence said in a June 21 Senate hearing. “We haven’t been able to get into Cook County Jail for quite a long time.”

“In many cases, we know who these individuals are—we have biometric identifiers,” Albence said. “They’ve been arrested by the Border Patrol, or arrested by ICE previously, and removed, and re-entered the country unlawfully. We know they are gang members. We know they’re criminals.

“We’re not asking the state or local agency to do anything besides give us access and transfer that individual to our custody at the completion of their criminal process so we can have a safe, orderly transfer and remove them from the country or prosecute them accordingly.”

Illegal border crossings at the southwest border are down by 47 percent compared to the same period last year, according to a fact sheet released by the White House on Aug. 17.

More than 57,000 illegal aliens have received orders of removal or have voluntarily departed, representing a 30.9 percent increase compared to the same period last year.