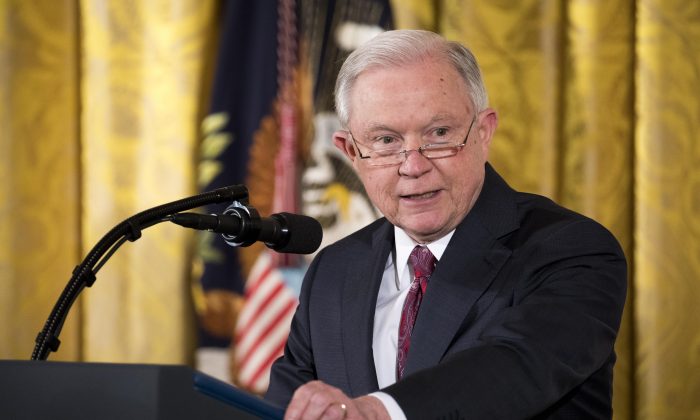 Attorney General Jeff Sessions introduces President Donald Trump during a Public Safety Medal of Valor award ceremony at the East Room of the White House in Washington, on Feb. 20, 2018. The medal is the nation's highest award to public safety officers who have 'exhibited exceptional courage, regardless of personal safety, in the attempt to save or protect human life.' (Samira Bouaou/The Epoch Times)
Trump Administration

Attorney General Jeff Sessions appointed a Utah federal prosecutor to lead a criminal investigation into matters that arose as part of investigations into Russian meddling in the 2016 election, according to a letter sent by Sessions to lawmakers on March 29.

Republicans in Congress have been asking Sessions to appoint a second special counsel to investigate a battery of matters surrounding the Russian collusion investigations. While Sessions announced in his March 29 letter that he won’t be appointing a special counsel, at least for now, he revealed that he had appointed a federal prosecutor months ago to investigate the same matters.

In November last year, Sessions assigned U.S. Attorney John Huber to lead the case. Huber has been cooperating with Justice Department Inspector General Michael Horowitz, who has 470 investigators at his disposal, Sessions noted.

Huber is specifically probing potentially criminal abuses of government surveillance by the Obama administration. Findings by the House intelligence committee suggest that top officials in the FBI, Department of Justice (DOJ), and the State Department participated in obtaining a fraudulent warrant to spy on the Trump campaign before and after the 2016 election. Huber is also looking into the handling of the investigation of the Clinton Foundation’s connection to the Uranium One deal.

While establishment media focused on the fact that Sessions is not appointing a special counsel, the appointment of a federal prosecutor is “brilliant” because it combines the powers of the inspector general with a prosecutor to seek indictments and get quick results for Trump, according to George Washington University law professor Jonathan Turley, a top national legal expert on special counsels and congressional investigations of government wrongdoing.

“I think people are missing what could be a brilliant move here by Sessions,” said Turley, in an interview with Fox News. “What he did is he essentially combined the powers of the inspector general with the powers of a line prosecutor.”

In February, Trump called on Sessions to appoint a Justice Department lawyer to investigate “massive FISA abuse.” Sessions had done just that months before Trump called for it. The president was likely not informed of Huber’s appointment since the investigation is politically charged and should remain impartial.

“Why is A.G. Jeff Sessions asking the Inspector General to investigate potentially massive FISA abuse,” Trump wrote on Feb. 28. “Will take forever, has no prosecutorial power and already late with reports on Comey etc. Isn’t the I.G. an Obama guy? Why not use Justice Department lawyers? DISGRACEFUL!”

Huber’s legal authority as a U.S. attorney allows him to impanel a grand jury anywhere in the United States. Additionally, Huber, based in Utah, is far away from what Trump refers to as the Washington “swamp.” “That distance between him and Washington is very important,” Turley said.

The investigator general’s recommendations based on the probe have already resulted in the firing of FBI Deputy Director Andrew McCabe. The final report by Horowitz has not yet been released.

Sessions also emphasized that he still reserves the option to appoint a special counsel.