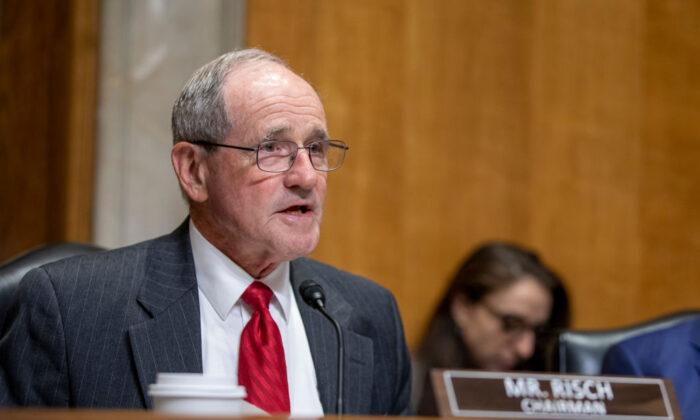 Sen. James Risch (R-Idaho) condemned the Biden administration’s consideration of implementing a “sole purpose” policy for its nuclear weapons on Dec. 7, saying that such a move would leave the nation’s allies and partners vulnerable to aggression from China.

“I believe that the administration is making a serious, serious mistake in even considering this, as even considerations have consequences in this arena,” Risch said.

“If the Biden administration adopts a sole purpose nuclear declaratory policy, it will scare our friends, embolden our adversaries, and damage the very non-proliferation goals it claims to support,” Risch said.

The comments were made at a discussion hosted by Washington-based think tank Heritage Foundation that explored the potential ramifications of such a shift in policy.

The Biden administration is currently conducting its nuclear posture review, the results of which are expected in 2022. A key contention of the review is the possibility that the administration will end its strategy of “strategic ambiguity,” and adopt a policy of either “sole purpose” or “no first use.”

A sole purpose policy would mean that Washington would officially declare that its nuclear arsenal exists only to deter nuclear use against itself or its allies.

A no first use policy would mean that the United States would pledge to never be the first party to use nuclear weapons in conflict, and would only use them in defense against nuclear aggression.

The United States’ current policy of strategic ambiguity means that it’s deliberately vague on its future use of nuclear weapons, which doesn’t rule out first use.

Critics of such policies, including Risch, believe that maintaining ambiguity as to when the United States might use a nuclear weapon is the best way of deterring adversaries from both nuclear and conventional aggression.

Ambiguity, according to Risch, is vital to the United States’ allies, which depend upon the nation’s nuclear umbrella for protection. Japan and all the members of NATO enjoy the protections of the U.S. nuclear arsenal.

Risch said that adopting a policy of sole purpose would be effectively the same as adopting a no first use policy as to the effect it would have on allies and partners. He also said such a shift would serve to embolden the Chinese regime and increase nuclear proliferation.

Beijing is currently in the process of expanding and modernizing its nuclear arsenal. It is expected to have 1,000 nuclear warheads by 2030. U.S. military leaders previously said that its tests of a hypersonic system in July appeared to be aimed at developing a nuclear first-use capability.

Risch was joined by representatives from Japan and the UK in voicing concerns about how such a policy shift would impact the defense of the United States’ closest allies.

“The United Kingdom and, indeed, all of the other NATO allies would be dismayed, I think, and very disappointed if the United States was to consider no first use or sole purpose,” said George Robertson, who previously served as UK defense secretary and NATO secretary general.

Robertson said that the desire to lead by example and reduce nuclear tensions through such a policy shift was idealistic, but that it would not improve the global strategic situation. He noted that Britain reduced its nuclear arsenal in 1998, under his leadership as defense minister, but the move had not affected the strategic landscape.

“I thought that we could send an example and that would lead to reciprocity,” Robertson said. “It didn’t lead to any reciprocity, [or] anything at all.”

Likewise, Taro Kono, a Japanese politician and former minister of defense and foreign affairs, said that China was already rapidly growing its military throughout east Asia and would be encouraged to continue by such a policy shift.

The United States may have once been able to count on its superior numbers in the region, he said, but those days were dwindling.

“Once, U.S. conventional forces dominated the region,” Kono said. “But it’s no longer overwhelming, and China is fast catching up.”

Kono pointed to Japan’s particular reliance on the United States’ nuclear umbrella. The Japanese constitution has barred the adoption of strike capabilities since World War II and limited its military to a self defense force.

As such, the capabilities of the United States are central to Japan’s efforts to preserve itself in the event of a potential conflict, such as a war over Taiwan. If the United States declared it would not use nuclear weapons against other attacks, Kono said, it would be a great loss for Japan.

“We are very concerned about the situation and, especially, Taiwan Strait issues,” Kono said.