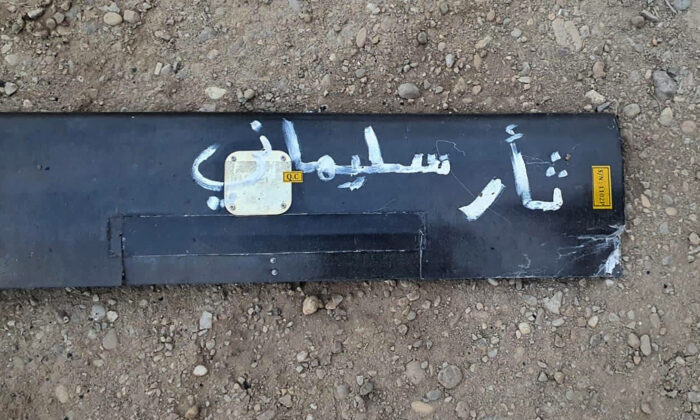 A part from the wreckage of a drone with Arabic that reads, "Soleimani's revenge" lies on the ground at Baghdad airport, Iraq, on Jan. 3, 2022. (International Coalition via AP)
Middle East

All three coincided with a massive memorial in Tehran for Qassem Soleimani, the terrorist leader killed by a U.S. drone strike in 2020 in Iraq.

The taking of the Emirati ship Rwabee marks the latest assault in the Red Sea, a crucial route for international trade and energy shipments. The Iranian-backed Houthis acknowledged the seizure off the coast of Hodeida, a long-contested prize of the grinding war in Yemen between the rebels and a Saudi-led coalition that includes the United Arab Emirates.

First word of the Rwabee’s seizure came from the British military’s United Kingdom Maritime Trade Operations, which only said an attack targeted an unnamed vessel around midnight. The coordinates it offered corresponded to the Rwabee, which has rarely given its location via tracking data in recent months unlike most commercial traffic in the region, according to the website MarineTraffic.com.

A statement from the Saudi-led coalition, carried by state media in the kingdom, acknowledged the attack hours later, saying the Houthis had committed an act of “armed piracy” involving the vessel. The coalition asserted the ship carried medical equipment from a dismantled Saudi field hospital in the distant island of Socotra, without offering evidence.

“The militia must promptly release the ship or the coalition forces will undertake all necessary measures and procedures to handle this violation, including the use of force if necessary,” Brig. Gen. Turki al-Malki said in a statement.

The Houthis later aired footage from the Rwabee on their Al-Masirah satellite news channel. It showed military-style inflatable rafts, trucks and other vehicles on the vessel, a landing craft that lowers a ramp to allow equipment to roll on and off. One brief clip showed what appeared to be a collection of rifles inside a container.

“It is completely obvious today that the information that this ship was carrying a civilian field hospital is not correct,” said Yahia Sarei, a Houthi military spokesman. “This is clearly military equipment.”

Saudi state television alleged the Houthis transferred the weapons onto the ship.

An employee at the vessel’s owners, Abu Dhabi-based Liwa Marine Services, told The Associated Press in a telephone call that the Rwabee appeared to have been the target but said they had no other information. The employee declined to comment further and hung up before giving their name.

A similar assault happened in 2016 involving the Emirati vessel SWIFT-1, which had been sailing back and forth in the Red Sea between an Emirati troop base in Eritrea and Yemen. The vessel came under attack by Houthi forces in 2016. The Emirati government asserted the SWIFT-1 had carried humanitarian aid; U.N. experts later said of the claim that they were “unconvinced of its veracity.”

No group immediately claimed responsibility for the hacking of the Jerusalem Post’s website. The hackers replaced the Post’s homepage with an image depicting a missile coming from a fist bearing a ring long associated with Soleimani.

The image also depicted an exploding target used during a recent Iranian military drill that was designed to look like the Shimon Peres Negev Nuclear Research Center near the Israeli city of Dimona. The facility is home to decades-old underground laboratories that reprocess spent rods from a nuclear reactor to obtain weapons-grade plutonium for Israel’s nuclear bomb program.

Under its policy of nuclear ambiguity, Israel neither confirms nor denies having atomic weapons.

“We are aware of the apparent hacking of our website, alongside a direct threat to Israel,” the English-language newspaper wrote.

The newspaper later restored its site. It noted Iran-supporting hackers previously targeted its homepage in 2020.

The hack came after Israel’s former military intelligence chief in late December publicly acknowledged his country was involved in Soleimani’s killing. The U.S. drone killed the general as he was leaving Baghdad’s international airport.

In Iraq on Monday, troops shot down two so-called “suicide drones” at that same airport, American and Iraqi officials said. No group immediately claimed the attack, though one of the drones’ wings had the words “Soleimani’s revenge” painted on it in Arabic. Militias backed by Iran have been suspected in similar assaults. No injuries or damage were reported.

As the head of the elite Quds, or Jerusalem, Force of the Revolutionary Guard, Soleimani led all of its expeditionary forces and frequently shuttled among Iraq, Lebanon and Syria. Quds Force members have deployed in Syria to support President Bashar Assad in that country’s long war, as well as in Iraq in the wake of the 2003 U.S.-led invasion that toppled dictator Saddam Hussein, a longtime foe of Tehran.

Soleimani rose to prominence by advising forces fighting the ISIS terrorist group in Iraq and in Syria on behalf of the embattled Assad.

U.S. officials say the Guard under Soleimani taught Iraqi militants how to manufacture and use especially deadly roadside bombs against U.S. troops. Iran has denied that.