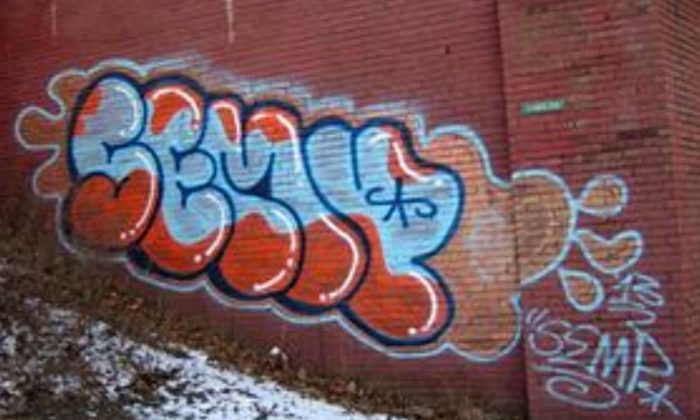 Photo of a graffiti done by Peter Podsiadlo. (Courtesy of NYPD)
Crime and Incidents

A man responsible for graffiti throughout Queens and Long Island was arraigned on 23 felony counts in Queens court on Thursday. Peter Podsiadlo, a 32-year-old heavy equipment operator, was arrested by the NYPD on Wednesday at his home in Nassau County. Podsiadlo was charged with spray painting highway overpasses and walls throughout Queens.

The NYPD said on Thursday that Podsiadlo has a long history of “defacing property with spray paint.” He was arrested after posting photos of his graffiti on which he uses the tag “SEMP.” His work has been spotted in numerous places along the Cross Island Parkway, and the Clearview and Long Island Expressways, according to police.

It’s not his first arrest. On March 21, he led police on a foot chase through people’s backyards in Queens after he was spotted with graffiti instruments. After his release, police used social media to track his exploits, which included photos of graffiti he had made.

The charges against Podsiadlo come at a time when New York City is struggling with the controlling rise in graffiti. There has been a five percent increase in graffiti-related complaints citywide so far in 2014, according to NYPD statistics; almost 5,000 complaints so far this year. The number of people arrested for graffiti has increased, too. It’s up 11 percent from last year, with 771 suspects arrested.

In an interview with WNYC Radio in April, NYPD Police Commissioner William Bratton said that he considers tackling the rise of graffiti in the city a priority.

“Graffiti is a constant battle. It’s one of the issues I’m going to be focusing on,” said Bratton, who added that he’d told Mayor Bill de Blasio of his plans. “As a city, we need to basically take it on because that’s the first sign of urban decay.”

Bratton subscribes to a policing theory called “broken windows,” which says that unaddressed small crimes lead to larger problems. Graffiti, which is expensive to clean up, is believed by law enforcement officials to lead to larger issues such as social decay and the perception of disorder, decay, and lawlessness.