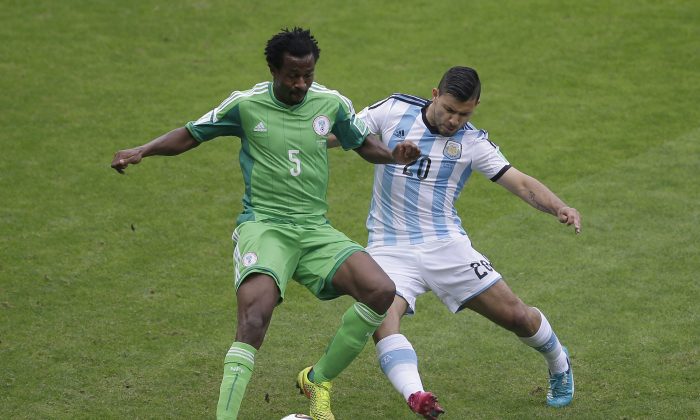 Sergio Agüero was injured during Argentina’s World Cup match against Nigeria on Wednesday in the 38th minute.

He was replaced by Ezequiel Lavezzi.

The extent of the injury isn’t clear at this point.

Fans on Twitter noted several things about what happened.

“Aguero is so injury prone. He must be a nightmare to manage,” said one.

“No Kun Agueroooo Nooooo…. Argentina will need you in this bid for WC,” said another.

PORTO ALEGRE, Brazil—Nigeria and Argentina are not resting any of their starters in their final Group F match on Wednesday and sticking with the lineups they had in their previous matches.

Argentina will again rely on captain Lionel Messi — with two World Cup goals in Brazil already — moving wide and deep in a three-man attack behind Sergio Aguero and Gonzalo Higuain.

Vincent Enyeama will try to remain the only goalkeeper yet to concede a goal at this World Cup, while striker Peter Odemwingie has been called up again after scoring the winner against Bosnia.

Already qualified for the second round, Argentina needs at least a draw to win Group F. If Nigeriawins it will top the group, while a draw is enough to make sure of advancing.