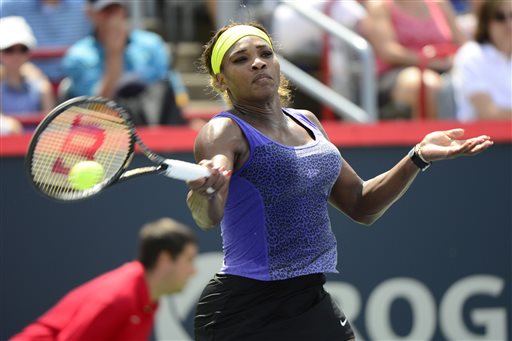 The tennis match is slated to start at 1 p.m. EDT in Montreal.

The game will be broadcast on ESPN 2 in the United States and CBC in Canada.

Live streaming will be available via Watch ESPN and CBC as well as the WTA.

The match between the sisters will be their 25th.

Venus won the first three matches between the sisters, starting at the Australian Open in 1998, and five out of the first six before Serena began gaining the upper hand at the NASDAQ-100 Open in 2002. Serena has the 14-10 total in her favor.

The sisters have only played once since 2009.

They have both struggled this year, though Venus broke her title drought and Serena has won multiple championships as usual. Serena won the Rogers Cup last year.

In the other bracket, No. 3 Agnieszka Radwanska will take on unranked Ekaterina Makarova at 6:30 p.m.

The women’s final will be played on Sunday.