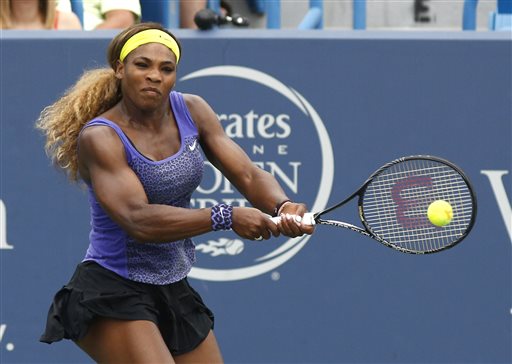 The match will be broadcast on ESPN.

Williams of the United States, ranked No. 1 in the tournament and No. 1 in the world, defeated No. 12 Caroline Wozniacki of Switzerland in the semifinals, 2-6, 6-2, 6-4 after beating No. 8 Jelena Jankovic of Serbia 6-1, 6-3 in the quarterfinals.

Ivanovic of Serbia, ranked No. 9 in the tournament and No. 11 in the world, defeated No. 5 Maria Sharapova of Russia in the semifinals, 6-2, 5-7, 7-5 after beating unranked Elina Svitolina of Ukraine in the quarterfinals, 6-2, 6-3.

Williams and Ivanoic have played seven times, starting in 2006 at the U.S. Open. Three of the matches were earlier this year.

Ivanovic got her first and only win against Williams so far at the Australian Open, beating her 4-6, 6-3, 6-3 in the fourth round. Williams took out Ivanovic in the Rome Open semifinals and the Bank of the West Classic quarterfinals.

MASON, Ohio—Serena Williams rallied to advance to the Western & Southern Open final, and Roger Federer moved into position Saturday night for his sixth title in the tournament.

Williams lost a set for the first time in the tournament and committed 41 unforced errors, 20 more than Wozniacki. Williams will face ninth-seeded Ana Ivanovic in the final. Ivanovic beat fifth-seeded Maria Sharapova 6-2, 5-7, 7-5 in a night match.