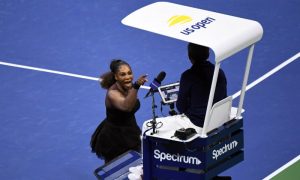 Serena Williams Speaks Out, Says She Didn’t Get Coaching in US Open Final

Serena Williams in a new interview denied getting coaching during the U.S. Open Final where she lost to Naomi Osaka.

Patrick Mouratoglou, her coach, however, indicated that he was giving her signals.

“He said he made a motion,” she said to The Australian newspaper. “I don’t understand what he was talking about. We’ve never had signals.”

Her statement contradicted what Mouratoglou said.

Chair umpire Carlos Ramos issued a violation after he suspected him of coaching her during the match.

For the penalization, she berated Ramos during the match and also broke her racket before losing. He then penalized her for breaking the racket and arguing with him.

“I didn’t get coaching,” Williams said during the match. “I don’t cheat! I didn’t get coaching. How can you say that? You owe me an apology. I have never cheated in my life!” The third warning she got came when she called the umpire a “thief,” Fox News reported.

“You will never, ever, ever be on another court of mine as long as you live. You are the liar. When are you going to give me my apology? You owe me an apology. Say it. Say you’re sorry…And you stole a point from me. You’re a thief, too!” Williams said to Ramos.

On Sept 12,  Ramos said that after the match, he was “fine, given the circumstances,” Time magazine reported. He was referring to the controversy around the officiating during the match. “It’s a delicate situation, but umpiring ‘a la carte’ doesn’t exist. Don’t worry about me,” he said.

The president of the United States Tennis Association, Katrina Adams, and Women’s Tennis Association CEO Steve Simon were among the most vocal backers of Williams claims of sexism against Ramos. However, Ramos received widespread support from former tennis officials and his employer, the International Tennis Federation (ITF).

The ITF’s support showed a growing consensus that Ramos handled the situation impressively under tough circumstances.

“[W]e cannot measure ourselves by what we think we should also be able to get away with,” Martina Navratilova, an eighteen-time Grand Slam singles champion said, adding, “There have been many times when I was playing that I wanted to break my racket into a thousand pieces. Then I thought about the kids watching. And I grudgingly held on to that racket,” according to The New York Times.