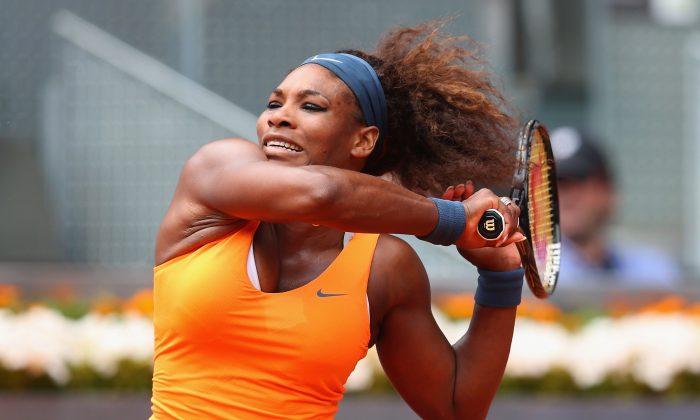 Serena Williams of USA in action in her match against Lourdes Dominguez Lino of Spain during day four of the Mutua Madrid Open tennis tournament at the Caja Magica on May 7, 2013 in Madrid, Spain. (Julian Finney/Getty Images)
Sports

Serena Williams responds: After young Sloane Stephens ripped the star tennis player in an interview with ESPN the Magazine, Williams broke her silence.

“I don’t really know. I don’t have many thoughts,” Williams told reporters in Spain, according to Sports Illustrated.

“I’m a big Sloane Stephens fan and always have been,” Williams said. “I’ve always said that I think she can be the best in the world. I’ll always continue to think that and always be rooting for her.

“So I really just always wish her — and anyone, really, especially from America — the best. We don’t have that many American players, so it’s always exciting to see so many young players doing so well.”

Stephens, 20, has been likened to a young Serena Williams.

“She’s not said one word to me, not spoken to me, not said hi, not looked my way, not been in the same room with me since I played her in Australia,” Stephens said. “And that should tell everyone something, how she went from saying all these nice things about me to unfollowing me on Twitter.”

“Like, seriously! People should know,” Stephens continued. “They think she’s so friendly and she’s so this and she’s so that — no, that’s not reality! You don’t unfollow someone on Twitter, delete them off of BlackBerry Messenger. I mean, what for? Why?”