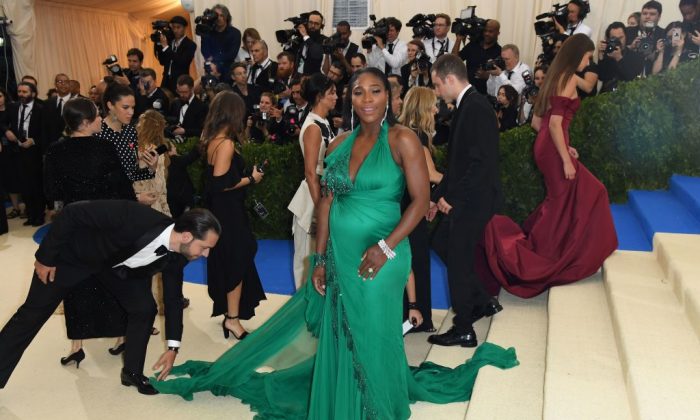 Serena Williams arrives at the Costume Institute Benefit May 1, 2017 at the Metropolitan Museum of Art in New York. (ANGELA WEISS/AFP/Getty Images)
Sports

Serena Williams on Body Image and Becoming a Mother

Serena Williams penned a heartfelt, honest letter to her mother on Sept. 19, sharing her thoughts about body image and on becoming a mother.

The open letter to her mother, published on reddit, comes just over two weeks after the tennis champion gave birth to her baby daughter, Alexis Olympia Ohanian, Jr.

“Dear Mom, You are one of the strongest women I know,” the 35-year-old tennis champion writes in the post.

“I was looking at my daughter… and she has my arms and legs! My exact same strong, muscular, powerful, sensational arms and body,” she says, seeing the likeness of herself in her baby daughter.

The tone of the letter then changes. The tennis star touches on how she’s been told she doesn’t belong to women’s sports because of her strong physique and references past accusations of doping.

“No, I have always had far too much integrity to behave dishonestly in order to gain an advantage,” she said, in reference to taking performance-enhancing drugs.

“We are curvy, strong, muscular, tall, small, just to name a few”, she writes, speaking of women’s body images.

Williams, who is the youngest of five, expresses gratitude to her mother, describing her as “classy” and the “role model I needed” in the post.

After reading the open letter, her mother, Oracene, said on twitter, “Beautiful for all Women.”

“Thank you for being the role model I needed to endure all the hardships that I now regard as a challenges–ones that I enjoy. I hope to teach my baby Alexis Olympia the same, and have the same fortitude you have had,” Williams wrote in the post.

Her daughter, Alexis, is named after her fiancé reddit co-founder Alexis Ohanian.

Some think part of the letter is a dig back at Maria Sharapova, who references Williams more than 100 times in her memoir “Unstoppable” and comments on Williams’ “thick arms and legs.”

For the most part though, the letter focuses on thanking her mother.

The letter ends: “Promise me, Mom, that you will continue to help. I’m not sure if I am as meek and strong as you are yet. I hope to get there one day. I love you dearly.”