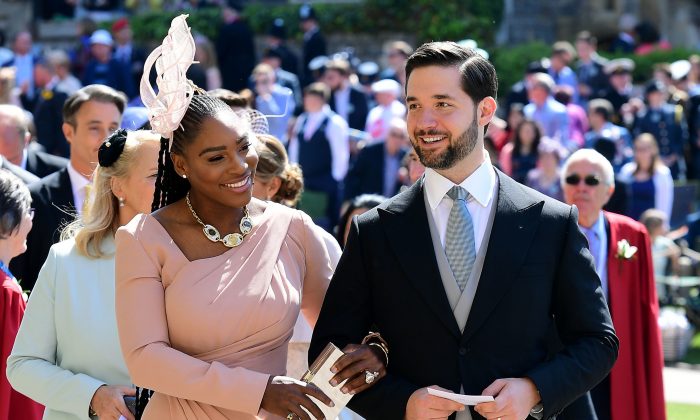 US tennis player Serena Williams and her husband Alexis Ohanian arrive for the wedding ceremony of Britain's Prince Harry, Duke of Sussex and US actress Meghan Markle at St George's Chapel, Windsor Castle, in Windsor, on May 19, 2018. (IAN WEST/AFP/Getty Images)
Entertainment videos

Serena Williams and her husband Alexis Ohanian made an impromptu getaway to Italy after the 36-year-old tennis player expressed her cravings for Italian food.

A photo of the couple on Ohanian’s Instagram page showed they were enjoying some great wine on a gondola ride, with the caption “She wanted Italian for dinner, so….”

She wanted Italian for dinner, so…

The couple raved about their last-minute flight to Venice on their social media accounts.

The 35-year-old Reddit co-founder shared a shot of his wife walking along the street at night in the ancient city and wrote, “Last night was a blur.”

Last night was a blur.

Williams also shared an amazing view of her hotel room by flying a drone camera out of the skylight.

Loving family time in beautiful Italy. What an insane room I stayed in. I got to look at stars from my bed at night!! This week has been a dream! ?? ☁ @ChenotGroup @albereta @espacechenot_albereta

The trip abroad took place less than a week after Williams was defeated by Angelique Kerber in the final round at Wimbledon, according to People.

“I have so much to look forward to,” said Williams during her interview after her loss. “I’m literally just getting started.”

The athlete and her husband also have an adorable 10-month-old daughter named Alexis Olympia to look after.

The couple departed Italy on Sunday and left with some lovely memories of their quickie vacation.

“Venezia made a great first impression on the family. We’ll certainly be back. But there’s work to be done,” wrote Alexis Ohanian.

Venezia made a great first impression on the family. We’ll certainly be back. But there’s work to be done…