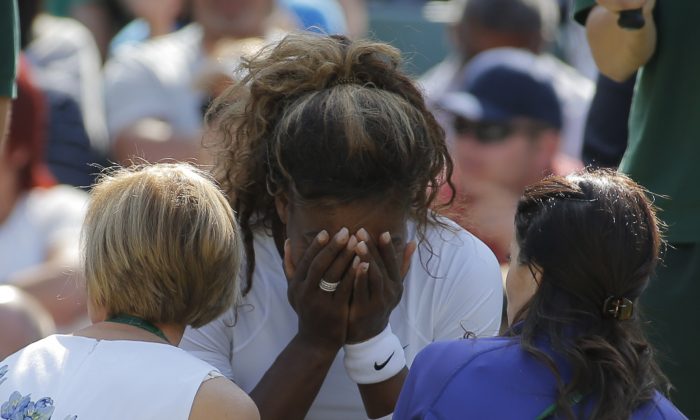 Court officials talk to Serena Williams of the U.S as she and Venus Williams retire after 3 games from their women's doubles match against Kristina Barrois of Germany and Stefanie Voegele of Switzerland at the All England Lawn Tennis Championships in Wimbledon, London, Tuesday July 1, 2014. (AP Photo/Pavel Golovkin)
US

Serena Williams has denied that drug use caused the bizarre breakdown at Wimbledon earlier this year ahead of her first match in the U.S. Open.

In her first comments about the breakdown, Williams also denied being pregnant.

Speculation was rampant after Williams followed a loss in the singles portion of the tournament to severe underdog Alize Cornet with a forfeit in the doubles competition that ended after Serena struggled to hold on to the ball and cried while being examined by medical staff on the court.

Williams up-and-down swings–winning one tournament, losing in the early rounds of the next–all year have fueled the rumors.

Williams told Sports Illustrated that she has seen just about every theory about her performance at Wimbledon but says all are untrue.

“I have nothing to hide,” she says. “No, I didn’t take anything. If you want to ask me if I took drugs, I didn’t take drugs. I’m not on drugs. I’ve heard it all. I’m not pregnant; I wasn’t pregnant. Although I think a baby would be great, but there’s a time and place for everything. But no, I don’t do drugs. Never did ’em. I’m scared of ’em. I’m not on that stuff.”

Asked if she was drunk, Williams laughed and said “I wish.”

Williams said that she had been in bed for three straight days following the surprise loss to Corney, feeling dehydrated and dizzy, “sweating like crazy.” Venus urged her to withdraw from the doubles match but Serena tried to go through with it.

“I wanted her to put the racket away, but I tried not to be bossy,” Venus said in her first statement on the matter, at last month’s tournament at Stanford. “She kept saying, ‘I want to try.’ She tricked me into letting her try.”