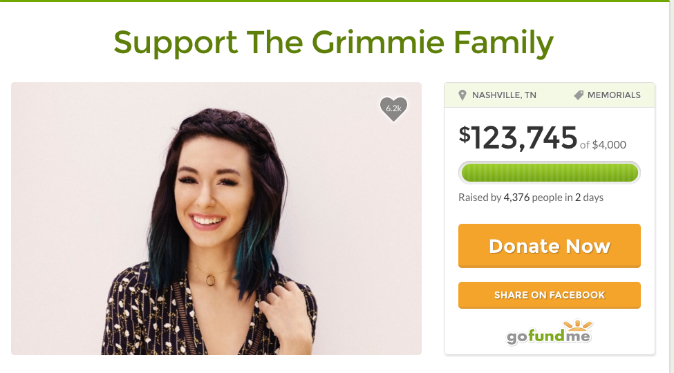 The stepdad of pop singer Selena Gomez has raised over $100,000 in 48 hours for the family of slain singer Christina Grimmie.

Brian Teefey launched a GoFundMe page on June 11 to financially assist the Grimmie family, as he considered Christina a “second daughter.”

“Words cannot begin to describe the pain I am feeling,” Teefey said in the GoFundMe page. “I learned this business through the eyes of a father and Christina was like a second daughter to me.”

He continued, “All I wanted to do was assist (Grimmie) in achieving her musical dreams while protecting her from the pitfalls associated with the business. I never could have imagined this horrific event being one of the pitfalls needing to be avoided.”

Grimmie, who reached musical stardom with the help of YouTube and placing third in the singing competition show “The Voice,” was gunned down by Kevin James Loibl during an autograph session with fans after a concert in Orlando, Fla. on Friday night. She was 22. Her older brother, Marcus, tackled the gunmen, who fatally shot himself.

Loibl traveled from St. Petersburg, Florida to Orlando armed with two handguns, a knife and additional magazines of ammo with the intent to kill Grimmie, police sources have said, adding that no motives are yet known.

Gomez honored Grimmie during a Miami concert on Saturday night. The songstress sang a rendition of Hillsong’s “Transfiguration,” dedicating the song to her fallen friend.

“When she was 14, we met her, and my parents and I signed her,” Gomez told the crowd at the American Airlines Arena. “One thing about Christina and her family is that she holds her faith so closely to her. And I think it’s not about a religion and it’s not about good deeds. It’s just that she had faith, and I don’t really understand how this really happened, but I would like to dedicate this next song to her.”

Gomez struggled to get through the song, breaking down in tears.