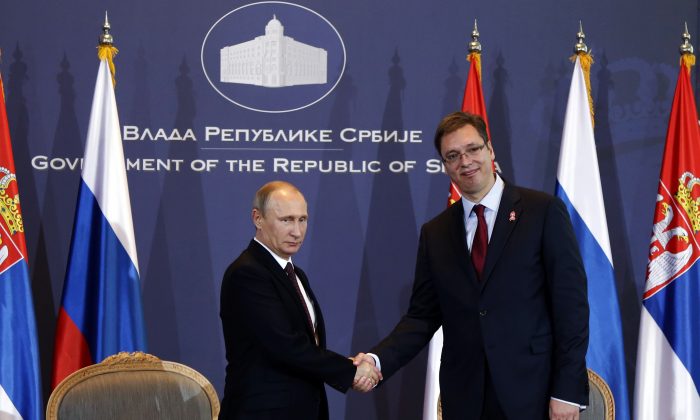 Serbia’s Choice Ahead of Key Vote: Russia or the West

JAGODINA, Serbia—His fists are clenched, his legs slightly apart, expressing firmness and leadership. His head is turned slightly to the side, blue eyes looking into the distance with an air of calm determination.

The larger-than-life figure of Russian President Vladimir Putin has a prominent place in Serbia’s only wax museum among the Balkan country’s historic and religious leaders and other famous individuals such as top-ranked tennis player Novak Djokovic.

The only foreigner in the crowd, Putin—dressed in a blue, tailored suit, white shirt and a red and white dotted tie—has drawn thousands of visitors in the past weeks, testifying to the admiration many Serbs feel for both the Russian president and Russia as a whole.

“If only Putin had been around in 1999, no one would have dared bomb us,” said Milorad Arizanovic, referring to NATO’s 78-day air war against Serbia over its crackdown against Kosovo Albanian separatists. Standing by Putin’s figure, the 65-year-old retiree declared: “Finally there is someone who’s standing up to the West.”

That’s exactly what Russia wants to hear from Serbia, where it is battling for influence in the run-up to general elections on Sunday that many see as a test of the country’s enthusiasm for the current government’s goal of joining the European Union.

Moscow has been slowly losing its clout in Eastern Europe, as countries have joined NATO and the EU. Most recently, tiny Montenegro has been invited to join the Western military alliance despite strong protests from Russia.

This has left Moscow struggling to retain its economic, political and social presence in the region. Serbia appears to be the Kremlin’s prime target as it aims to maintain some sort of buffer zone against spreading Western influence.

Many Serbs still feel victimized by the West, years after the NATO bombing, and see no real benefits from the lengthy accession talks with the EU. For them, a close relationship with Slavic ally Russia seems a more attractive option.

If the far-right parties make major gains in the vote, it could derail the country’s EU ambitions and destabilize a region torn apart by wars in the 1990s.

Analysts say Russia has been working hard to boost its power base in Serbia, adding to the already strong cultural and historic ties. Russian officials—including Putin and Prime Minister Dmitry Medvedev—have been frequent visitors, amid a rise in economic cooperation, political and military ties.

Jelena Milic, of the pro-Western think tank Center for Euro-Atlantic Studies, says Russia’s so-called “soft power”—acting on Serbian politics through attraction and persuasion rather than by force—has reached alarming levels.

Putin Praises Obama, Talks Hillary Clinton, and Whether He Will Remarry on Call-In TV Show

“Replacement of democracy with autocracy under the current Russian model is the main objective of Russian soft power in Serbia and the region,” Milic said. “Another goal is to diminish support for European integration, and to discredit the very concept of EU and NATO expansion.”

Milic said there are more than 100 Moscow-backed organizations and media outlets active in Serbia, as well as a visible rise in right-leaning political groups aggressively advocating integration with Russia and an end to Serbia’s EU bid.

After Serbia recently surprisingly approved an enhanced cooperation agreement with NATO, pro-Russian groups responded swiftly with anti-NATO rallies, with protesters carrying pictures of Putin, and lashed out against the EU.

In neighboring Montenegro—also a Slavic and Orthodox Christian nation like Serbia and Russia—anti-NATO opposition has enjoyed open support from Russia. Opposition groups have organized violent protests to undermine the NATO bid, amid warnings from the Kremlin of unspecified “retaliation.”

The Next Cold War Has Already Begun in Cyberspace

Serbia’s conservative Prime Minister Aleksandar Vucic—who is expected to remain in power after Sunday’s vote—has said his government will pursue integration with the EU, but will cherish its close ties to Moscow as well.

Vucic’s government has refused to join Western sanctions against Russia over Ukraine and has proclaimed military neutrality to avoid Russian fury. But remaining politically and militarily neutral could prove difficult as Serbia advances on its EU path.

Vucic has faced mounting opposition from far-right groups seeking alliance only with Russia. Radical Party leader Vojislav Seselj, who was recently acquitted of war crimes by a U.N. tribunal and whose popularity in Serbia has been on the rise, has promised to turn the upcoming vote into a referendum on EU and Russia ties.

“Nothing good ever came from the EU, America and our other traditional enemies in the West. They bombed us, killed our children and took away our lands,” Seselj said. “We must join union with our Russian brothers. They have never bombed us.”

Although Russian investment in Serbia is modest compared with that from the EU, trade has been on the rise and polls still show Serbs regard Moscow as Serbia’s most important ally.

Pro-Russian propaganda has been in full swing ahead of the election.

Kremlin-owned Serbian-language media are producing biased coverage of events to support the groups that serve Russian interests; pro-Russian groups are organizing rallies against the EU and NATO; nationalist officials are blasting the West while promising economic revival together with “our brother Russians”; and pro-Kremlin trolls react in large numbers to any development.

Milic, the head of the pro-Western think-tank, has been one target of pro-Russian groups. After she appeared on a TV talk show advocating Serbia’s NATO membership, an avalanche of hate and threatening messages followed, and her name was publicly mentioned at anti-NATO rallies.

The slurs on social media included rape threats against her teenage daughter and forced police to give her 24-hour protection.

In Jagodina, a small industrial town in central Serbia, Putin’s statue is just one among many signs of adoration.

“Emperor, we love you,” reads a billboard in the center of Jagodina, under a picture of Putin. Putin T-shirts are sold on the streets and several cafes and even burger joints named after Putin have opened throughout Serbia.

The unveiling of the statue last month at the wax museum was attended by Foreign Minister Ivica Dacic, a political mentor of the Jagodina mayor.

“Putin is our main attraction,” Jelena Bulatovic, the museum manager, said, adding that since the figure was revealed, visitor numbers have jumped by 50 percent.

Asked why Putin’s figure appears to be taller than the Russian president himself, she explained: “We could not allow some high-school student to stand beside the figure and find himself taller than Putin.”