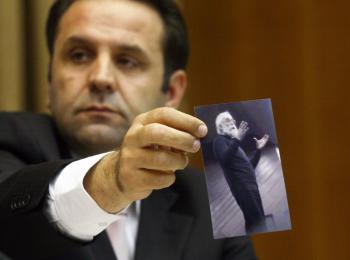 Serbian Minister Rasim Ljajic holds a photo of war-crimes suspect Radovan Karadzic during a press conference in Belgrade on July 22, 2008. On Dec. 29, Ljajic stepped down as the coordinator of the Action Team coordinating with the International Criminal Tribunal for Former Yugoslavia over failing to capture a key war-criminal suspect. (Goran Sivacki/AFP/Getty Images )
Europe

Kremena Krumova
Kremena Krumova is a Sweden-based Foreign Correspondent of Epoch Times. She writes about African, Asian and European politics, as well as humanitarian, anti-terrorism and human rights issues.
View profile
Follow
biggersmaller
Print
Serbia’s labor minister, Rasim Ljajic, resigned Dec. 29 as the coordinator of the Action Team cooperating with the International Criminal Tribunal for Former Yugoslavia (ICTY) after failing to keep his promise to arrest one of the two remaining main criminal suspects from the Yugoslavian wars—Bosnian military leader General Ratko Mladic.

Ljajic, who has played a leading role in the Action Team since its establishment in 2006, will keep his post as labor minister as well as that of president of the National Council for Cooperation. He also stressed that his act is a personal one and will not affect the progress of the team’s operations.

"We have a high degree of confidence from the international community and the ICTY. I was absolutely explicit that the resignation has nothing to do with operational activities, but it is a personal act of responsibility because of my poor estimates that Mladic would be arrested and extradited by the end of the year, and this is the only way it should be interpreted," said Ljajic for the Beta news agency in Serbia.

According to Ljajic, this year was the most fruitful one in terms of cooperation with the ICTY, and the efforts will continue.

"The past year has been the most successful so far. We have never worked so hard … and I am certain that such an effort must have results," said Ljajic, quoted by BBC.

The seizure of two chief war criminals from the time of the Yugoslavian wars (1991–2001)—Bosnian General Ratko Mladic and Goran Hadzic, charged for crimes in Croatia—prove to be a necessary step that Serbia must take toward EU membership.

Until recently, the Netherlands and the United Kingdom had blocked Serbia’s path to the EU due to the country's poor cooperation with the ICTY. Subsequently, the ban was lifted, and Serbia filed official candidature to be a full-right EU member.