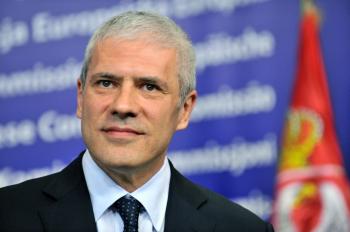 Kremena Krumova
Kremena Krumova is a Sweden-based Foreign Correspondent of Epoch Times. She writes about African, Asian and European politics, as well as humanitarian, anti-terrorism and human rights issues.
View profile
Follow
biggersmaller
Print
The pro-Western Serbian government, led by President Boris Tadic, decided to officially apply for EU membership on Dec. 22. The country hopes the EU will grant it candidate status and open a fast-track procedure for accession talks by the end of 2010.

“No one can doubt the road that Serbia has taken. Serbia is going toward European integration,” declared Tadic, who is also the main pro-EU party leader, quoted by Financial Times.

The official candidature entry will happen only three days after former Yugoslavian republics Serbia, Montenegro, and Macedonia were given visa-free access to the Schengen area, which covers most of the EU countries.

Within the 27-member European community, Germany, Italy, and Greece have expressed support for Serbia’s accession. But the United Kingdom and the Netherlands hold reservations, mainly related to the cooperation of the country with the U.N. tribunal for former Yugoslavia (ICTY).

Experts say Serbia is likely to join the EU in 2015 at the earliest, despite the momentum created during the last two years.

An 18-month blockade was broken through in the beginning of December this year, as the EU decided to resume its trade relations with Serbia. The Dutch government had opposed commercial ties with Serbia due to its long-term failure to arrest and hand to the ICTY in The Hague the last two major Balkan war criminals, Bosnian-Serb military leader General Ratko Mladic and politician Goran Hadzic, charged with crimes in Croatia.

Since the time of the Yugoslav wars between 1991 and 2001, Serbia has been restricted by the international community. Due to isolation, almost 70 percent of the nearly eight million Serbs didn’t possess international passports, as they had to obtain a visa to enter almost any country in the world. After the war ended, many countries imposed a visa regime on Serbia in order to prevent the unwanted flow of refugees.