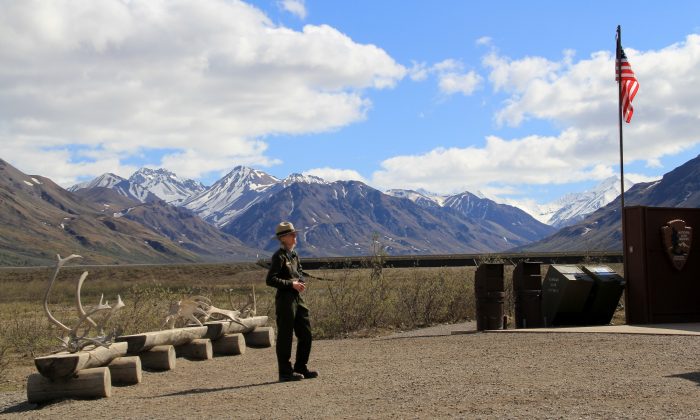 A lone ranger at a visitor center in Denali National Park, Alaska June 2013. Cuts in services are occurring in all 401 national parks, as a result of sequestration, and may include the closure of camping grounds and staff reductions. (Shar Adams/Epoch Times)
US

WASHINGTON—Sequestration may appear to be having little impact, but some analysts say federal agencies are still registering the cuts and the effects may be worse than estimated.

According to Scott Lilly, senior fellow with the Center of American Progress, Congress has addressed some of the more immediate problems, and agencies have been slow to release information, but the cuts make an impact.

“I anticipated that it would happen sooner than it has but in the end, when you don’t spend a $110 billion, there is impact,” he said.

A former staff director of the House Appropriations Committee, Lilly was one of the first to raise the alarm about the impact of sequestration on air services. Congress has since provided the Federal Aviation Administration flexibility to avoid furloughs for air traffic controllers.

In the National Parks Service (NPS), hard data on the effects of sequestration is not expected until after the summer, but with each of the 401 national parks instructed to cut its budget by 6 percent, the National Parks Conservation Association sees troubles.

“We are seeing reports that every park in the system has been impacted by the sequester, with varying levels of damage depending on the park,” said.

Park superintendents are making choices according to their unique situations, whether reducing hours at visitor centers, closing campgrounds and picnic areas, or cutting staff, but it is maintenance that is most concerning, said Garder. There is already an $11 billion maintenance backlog in the NPS, and the longer things like roads and trails go without repair, leaking roofs and sewage and water pipes go unaddressed, the more expensive repairs become.

“We are very concerned about what that means, not just for the experience of visitors and the safety of visitors and park staff, but also what this means for the deterioration or potentially irreparable damage to our national treasures,” Garder said.

At the community level, mayors say cuts to community services will create problems further down the line. The Community Development Block Grant (CDBG), for example, will be cut by $300 million. Mayor Setti Warren of Newton, Mass., described the grants as the “the life blood of the community.”

The longest-running program in the Housing and Urban Development Department, the block grants fund everything from child care and small-business loans to housing for poor families. When budgets were tight the “CDBG was the only money that allowed us to move forward,” said Rep. Michael Capuano (D-Mass.), who was mayor of Somerville for nine years.

A result of disagreement in Congress over how to address the deficit, the Budget Control Act of 2011 requires around $85.4 billion be cut from government spending during fiscal year 2013. Through sequestration, cuts will be made across the board in both defense and domestic programs.

Some believe the cuts are necessary to reduce the deficit, while others argue that they should be postponed or tailored while the economy improves. Nearly everyone criticizes the indiscriminate way they are to be applied.

In the science and technology community, the area considered most important to revitalize U.S. industry, a chill has settled in.

Government funding for research and development projects across federal agencies will be cut by an estimated $9.3 billion this year, according to the American Association for the Advancement of Science.

“It is like a slowly growing cancer,” said Steven Warren, vice chancellor for Research and Graduate Studies at the University of Kansas at a recent gathering of university research leaders, the Huffington Post reported. “It is going to do a lot of destruction over time.”

University leaders say they see young professors and doctoral students preparing to leave and take their research to other countries.

The cuts will also impact the National Institutes of Health, the government’s main sponsor of medical research. It will be forced to cut 5 percent or $1.55 billion of its fiscal year 2013 budget, touching every area of medical research, the institute said in a statement.

The Centers for Disease Control (CDC) will be forced to cut 2,000 disease trackers. This may go unnoticed provided there is not a major health scare or epidemic.

A lack of data and visible effects are prompting reports that the impact of sequestration was overblown.

Federal agencies have also come in the firing line for withholding information, but Lilly believes agencies simply don’t have the data yet.

“There are an amazing number of agencies where even the people that run the agency don’t quite know what the consequences are going to be,” he said.

He believes the staff at agencies like the National Park Service is trying to lessen the impact by making cuts in areas that will not be immediately noticed, deferring maintenance, for example.

“You really didn’t save the money, you just pushed the cost back to another time period,” he said.

Not only will the deferral process end up costing more, he believes the cuts and furloughs will impact surrounding industries and services in ways that have not yet been calculated.

“It is research worthy of some effort but I don’t know anyone that is doing it,” he said.

In that respect he believes the impact of sequestration may well be worse than predicted. “I have always thought that in the end they were going to find out they had a lot more at stake here,” Lilly said.