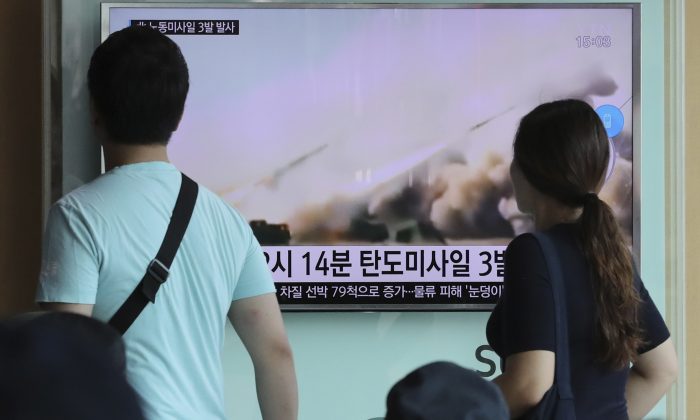 SEOUL, South Korea—North Korea on Monday fired three medium-range missiles that traveled about 1,000 kilometers (620 miles) and landed near Japan in an apparent show of force timed to coincide with the Group of 20 economic summit in China, South Korean officials said.

North Korea has staged a series of recent missile tests with increasing range, part of a program that aims to eventually build long-range nuclear missiles capable of striking the U.S. mainland.

Such tests are fairly common when international attention is turned to Northeast Asia, and this one came as world leaders gathered in eastern China for the G-20 summit of advanced and emerging economies. China is North Korea’s only major ally, but ties between the neighbors have frayed amid a string of North Korean nuclear and missile tests and what many outsiders see as other provocations in recent years.

South Korea’s Joint Chiefs of Staff said that the three ballistic missiles, all believed to be Rodongs, were launched from the western North Korean town of Hwangju and flew across the country before splashing into the sea.

A Joint Chiefs of Staff statement described the launches as an “armed protest” meant to demonstrate North Korea’s military capability on the occasion of the G-20 summit and days before the North Korean government’s 68th anniversary.

In early August, another Rodong missile fired by North Korea also traveled about 1,000 kilometers, the longest-ever flight by that missile.

All three missiles Monday fell in Japan’s exclusive economic zone, the 200-nautical-mile offshore area where a nation has sovereign rights for exploring and exploiting resources, according to Tokyo’s Defense Ministry.

Chief Cabinet Secretary Yoshihide Suga called the launches a “serious threat” to Japanese security and said that Tokyo protested to North Korea via the Japanese Embassy in Beijing.

The United States also condemned the launches, saying it was discussing with allies the proper response and plans to raise concerns at the U.N. The U.S. also plans to bring up the issue during the East Asia summit in Laos this week. President Barack Obama was to head to Laos on Monday evening.

Before Monday’s launch, South Korean President Park Geun-hye met her Chinese counterpart Xi Jinping on the sidelines of the G-20 summit and criticized the North for what she called repeated missile provocations that are threatening to hurt Seoul-Beijing ties.

Japanese Prime Minister Shinzo Abe approached Park during a coffee break at the G-20 and agreed to cooperate closely, according to Japan’s Foreign Ministry.

The latest firing won’t help the push by Xi to get Park to scrap the planned deployment of a powerful U.S. anti-missile system in the South.

During their meeting, Xi warned Park that “mishandling the issue is not conducive to strategic stability in the region, and could intensify disputes.”

China says the U.S. Terminal High Altitude Area Defense, or THAAD, system is meant to spy on China, while Seoul and Washington say the system is intended solely to defend against North Korea’s missile threat.

Last month, worries about the North’s weapons programs deepened after a missile from a North Korean submarine flew about 500 kilometers (310 miles), the longest distance achieved by the North for such a weapon. Submarine-based missiles are harder to detect before launch than land-based ones like Rodongs. In June, after a string of failures, North Korea sent an intermediate Musudan missile more than 1,400 kilometers (870 miles) high in a test launch that outside analysts said showed progress in efforts to acquire the ability to strike U.S. forces in the region.