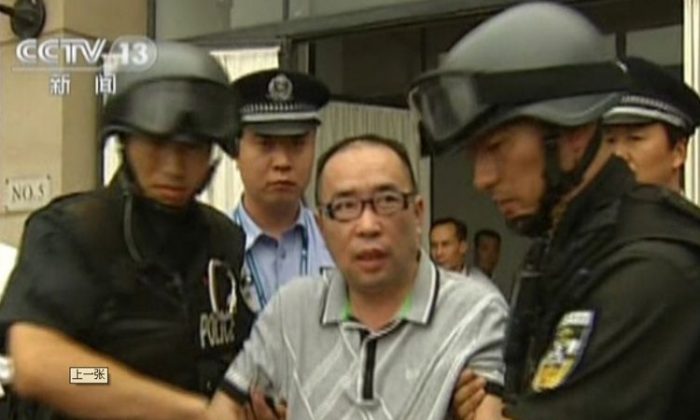 A TV grab from July 23, 2011. Lai Changxing, the most-wanted man in China and a highly successful smuggler, was sentenced to life in prison. (STR/AFP/Getty Images)
China

Lai Changxing, the most-wanted man in China and a highly successful smuggler, was sentenced to life in prison in what analysts say was part of a deliberate political strategy.

Lai, 53, a former farmer, was sentenced at a court in Xiamen and all of his assets were confiscated, Chinese regime mouthpiece Xinhua reported on Friday.

He was convicted of smuggling cigarettes, gasoline, and luxury cars worth around $4.3 billion, evaded $2.2 billion in taxes, and bribed 64 officials with around $6.3 million between 1996 and 1999.

During his heyday, Lai essentially turned Xiamen into his own private fiefdom and had an infamously opulent lifestyle, even traveling around in a bulletproof Mercedes that was once owned by ex-President Jiang Zemin, according to The London Telegraph. He also bought and attempted to play for Xiamen’s soccer team.

When he was implicated for his crimes, Lai fled to Canada and lived in Vancouver for 12 years before he was extradited back to China last July.

Some analysts have pointed out that when Lai was sent back to China, the regime did not move on the case until the Wang Lijun incident in February. At the time Lai’s empire was still intact during the mid-1990s, several Chinese Communist Party (CCP) Politburo Standing Committee members were high-level officials in Fujian Province.

Social commentator Wen Zhao believes putting Lai on trial and sentencing him this year was all part of President Hu Jintao’s plan. He said that two officials who are now members of the Standing Committee were probably, when they were in Fujian, paid off by Lai. These two officials, He Guoqiang and Jia Qinglin,—along with reportedly ousted security czar Zhou Yongkang—are or used to be part of former President Jiang Zemin’s faction.

There have been reports that Lai passed evidence to Hu Jintao, Wen Jiabao, and Xi Jinping that He Guoqiang and Jia Qinglin were bribed, and Hu and Wen could use that against them as they press down on Zhou Yongkang, the main supporter of ousted former Chongqing head Bo Xilai.

This makes Lai Changxing a card that the Hu, Wen, and Xi coalition played against He and Jia to stop them from interfering in the punishment of Zhou Yongkang.

Commentator Wen Zhao said this fact gives Hu and Wen a dominating lead in the Politburo, meaning that the faction loyal to Jiang Zemin is nearly gone. Meanwhile, veteran Chinese journalist Jiang Weiping has said that dark secrets dug up during the Lai case might be the final straw that breaks the back of Jiang Zemin’s faction.

Washington D.C.-based human rights lawyer Ye Ning commented that the end to Lai’s case shows that the basic arrangement for the 18th National Congress is set, where Hu Jintao and Wen Jiabao step down and Xi Jinping and Li Keqiang take over.

In another possible sign that Jiang Zemin’s faction is being cornered, Zhou Yongkang was not listed as one of the attendees of the 18th National Congress from Hebei Province, according to reports on Thursday. The meaning of this is unclear. Zhou attended the 17th Congress as a representative from Hebei, though it does not mean he must attend the 18th Congress as a Hebei representative. Observers are watching intently how it will develop.

It was recently reported that Zhou was stripped of his power, with detailed leaks discussing a showdown between Zhou and Wen Jiabao in a closed-door meeting.

The Japan-based Yomiuri Shimbun newspaper reported on Tuesday that the CCP has produced a list of 10 candidates for the Standing Committee, and may whittle it down to seven actual entrants. It predicted that the Communist Youth League (CYL) faction, aligned with Hu Jintao, will have four seats, while other three will be occupied by “princelings,” including Xi Jinping.