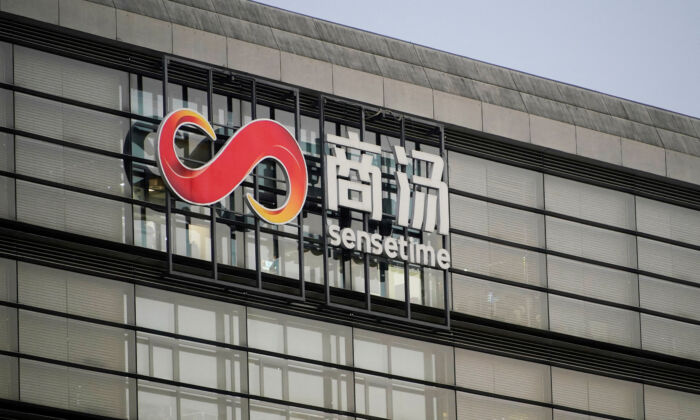 The logo of SenseTime is seen at SenseTime office, in Shanghai on December 13, 2021. (REUTERS/Aly Song)
Thinking About China

Shares were up as much as 148 percent as of Jan. 4 from its Dec. 30, 2021, IPO price of HK$3.85, minting SenseTime as one of the most successful Hong Kong IPOs of last year. It has since dropped a bit from earlier highs.

First, Hong Kong new issuance stocks have been performing terribly for much of 2021. Eight of the 10 largest Hong Kong stock listings of 2021 ended the year at below their offer price. The only post-IPO risers among the top 10 were Chinese electric vehicle companies Li Auto and Xpeng.

SenseTime management was unfazed. While there are still more than 11 months left in the year, the company’s stock has been off to a good start.

The company didn’t have a ton of options to pick from as to where to list its shares. SenseTime has been sanctioned by two U.S. administrations for its involvement in Beijing’s persecution of Uyghur minorities in the western Xinjiang Autonomous Region. The U.S. Treasury Department accused SenseTime in December 2021 of developing facial-recognition software to identify a person’s race and ethnicity, specifically to aid in the Chinese Communist Party’s (CCP) oppression and monitoring of Uyghur minorities. It was added to the U.S. investment blacklist as a result.

That followed actions in 2019 by the Trump-era Commerce Department to put SenseTime on the U.S. trade blacklist, barring U.S. companies from doing business with the firm.

Since then, the Biden administration delayed SenseTime’s IPO—originally anticipated in mid-December—to early January for the company and its advisers to assess the impact. However, SenseTime’s eventual IPO in Hong Kong provided an initial windfall for its early backers, notably Japan’s SoftBank Group.

SenseTime’s IPO within the friendly confines of Hong Kong could serve as a blueprint for future Chinese companies barred from listing by the U.S. government.

The IPO’s ultimate success remains to be seen. But the types of investors attracted by the initial listing are a roster of Beijing-approved capital providers. As part of its IPO, SenseTime raised more than $500 million from nine cornerstone investors, including the state-owned Mixed-Ownership Reform Fund and an investment fund affiliated with the Shanghai government. Other cornerstone investors included a handful of Chinese and Asian regional investment firms. Notably, U.S. investors were disallowed from participating, given the recent blacklisting.

Other Chinese firms not blacklisted by U.S. regulators can presumably list their shares in Hong Kong while allowing U.S.-based persons or investment funds to buy in.

It will be interesting to see how many currently U.S.-listed Chinese firms delist and move to Hong Kong, and the subsequent effect on their investor base.

Clearly, CCP regime leader Xi Jinping wants to keep more Chinese technology firms home. Part of this effort includes more heavily regulating where Chinese technology firms can list their shares, how and where user data must be stored, what businesses they can buy stakes in, and even regulating how artificial intelligence algorithms should operate.

In other words, Xi is tightly controlling China’s privately held companies as if they all work for the CCP.

Going forward, most Chinese companies wouldn’t pass the customary kinds of governance and compliance requirements that typical Western investors demand. And forget about ESG standards. In essence, they’re just not a good fit to trade on any U.S. or Western stock exchange where such conflicts of interest would be scrutinized.

As the CCP continues to integrate the former British colony politically, the Hong Kong Stock Exchange is a venue for Chinese companies to sell their shares to other Chinese and CCP-approved investors.

And SenseTime just showed them the way.