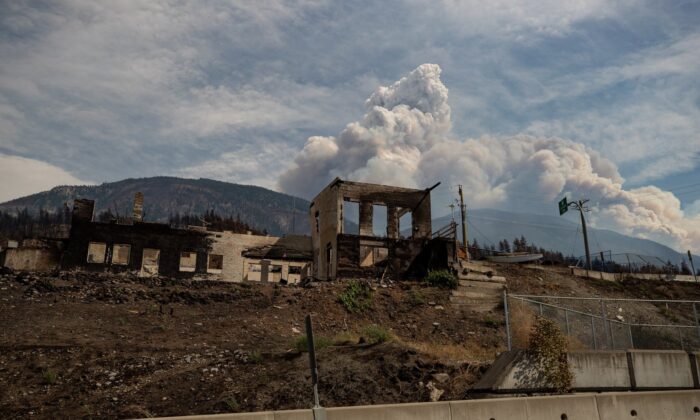 A property destroyed by the Lytton Creek wildfire is shown in Lytton, B.C., on August 15, 2021. (The Canadian Press/Darryl Dyck)
Canada

‘Sense of Future’ for Lytton If Homes Rebuilt by This Time Next Year: BC Minister

British Columbia’s public safety minister says he expects many houses and the municipal infrastructure destroyed by a wildfire in Lytton to be rebuilt by this time next year.

Mike Farnworth says that would give displaced residents returning home a sense of their future after 90 percent of their village burned to the ground last June 30 during a record-setting heat wave.

Debris removal is underway, possibly allowing rebuilding to start in September so that the water and sewer system can be put in place.

Farnworth says he understands the frustration of many residents who have been out of their homes for a year while the province works with First Nations to recognize the challenges of what is an important archeological site.

The village is believed by experts to have been occupied by Indigenous Peoples about 10,000 years ago, and the minister says that significance has made rebuilding complex because every resident will need to get a permit costing about $10,000.

Farnworth says the province has streamlined that process by holding the permit for the entire site and picking up the cost so that’s one less thing for residents to worry about, whether they had insurance or not.

“What I want people to know is we are committed to rebuilding. We are working very hard with the council, with the First Nations, to rebuild it,” he says.

Disruptions caused by supply chain issues and a highway system that was partly wiped out during an atmospheric river last fall have added to delays in rebuilding the community that will be more resilient to fire, Farnworth says.

The Insurance Bureau of Canada recently said the wildfire is estimated to have caused more than $100 million in insured damage.

Farnworth has said the government would look at including heat waves in the Emergency Program Act following the fire where two people died.

The province recently committed $21 million for rebuilding efforts as well as for hiring municipal staff and fire protection service to allow construction to begin.

Earlier this month, the federal government announced $77 million in funding to help rebuild a fire-resistant and energy-efficient community.