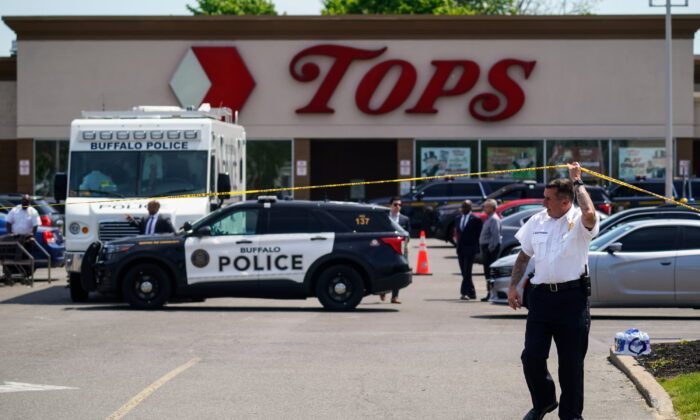 A police officer lifts the tape cordoning off the scene of a shooting at a supermarket, in Buffalo, N.Y., on May 15, 2022. (AP Photo/Matt Rourke)
Viewpoints

An article in The New York Times Sunday Magazine informs us that the people formerly known as “psychotics” or “schizophrenics” are the latest subculture to seek a rebranding.

They—at least some of them—now prefer to be known as “the Hearing Voices Movement.” No longer considering themselves to be mentally ill or in need of psychiatric intervention, they now insist they are merely believers in “nonconsensus realities.”

Of course, they were bound, sooner or later, to join the ever-growing ranks of such believers. You might almost say that nowadays there’s a consensus in favor of nonconsensus realities.

The trouble for the concept formerly known as “reality” began not with the idea of consensus but with that of “realities” as a plural noun. If you add to the current consensus about the existence of two, three, or more realities, the notion of an equal number of consensuses corresponding to them, you arrive at our current cultural state of contention and division between rival consensuses about what reality is—consensus, like reality, now being necessarily in the plural.

A good example was the reaction of the media, who are the big consensus-builders on the left, to the murderous rampage in Buffalo last weekend by a deranged youth—sorry, nonconsensus reality-believer—with a powerful and legally purchased weapon.

And here I pause to mention that, although this person’s name is known and his personal manifesto explaining why he did it is extant, I choose to make no further mention of either because (a) his particular nonconsensus reality is of no conceivable interest to me or (I assume) to my readers and (b) I agree with my former colleague Ari Schulman that such people kill strangers in public in order to win for themselves a sort of fame—the sort that we used to call “notoriety,” when notoriety was a bad thing.

If we could create a new consensus to deny such murderers the fame they seek, maybe we wouldn’t see quite so many of them.

But there’s a reason why that won’t happen anytime soon. Do you want to know what it is? It’s because, when there are competing consensual realities vying for public attention, adherents of the weaker and more dubious version of “reality” will inevitably seize upon a mass murder or any other disaster that it can associate—plausibly or implausibly—with the rival consensus in order to discredit it.

Thus, the fact that most of the murderer’s victims were black led several media voices to proclaim that he validated the carefully tended left-wing narrative that millions of people who don’t vote for the left are “white supremacists.”

See how that works? The murderer gets the fame, or notoriety, he murdered for, while millions of decent people who would never dream of doing such a thing get called white supremacists and, therefore, the “real” murderers.

There is a talk-show host on the Fox network named Tucker Carlson—perhaps you’ve heard of him?—who has been a thorn in the flesh of the left for years. He has apparently mentioned on his show something called “replacement theory,” a left-wing version of which once looked forward with undisguised delight to the prospect of a new, “minority-majority” America displacing the white majority of yesteryear through immigration.

We don’t hear so much about the left-wing version of this “theory,” if it can be called by so grandiose a name, because the media think they can attribute a more sinister, right-wing version of it to Carlson, or anybody else who is concerned about illegal immigration, as further evidence of, you guessed it, his “white supremacism”—which makes him guilty of the murders too.

Another carefully tended narrative of the left is that the incident in the Capitol by supporters of President Donald Trump on Jan. 6, 2021, amounted to an “insurrection” motivated not by loyalty to Trump but by the same “white supremacism”—of which the president himself was (of course) presumed to be guilty.

Traveling to Buffalo to commemorate the victims, his successor, President Joe Biden, invoked the alleged “insurrection” alongside the Buffalo murders on the assumption that both were manifestations of white supremacy, which was thus the real cause championed by “those who pretend to love America”—i.e., you know who.

There’s lately been a fuss in the media about the teaching of something called critical race theory (or derivatives of it) in elementary schools. The first instinct of many on the left was to deny that this was happening—it wasn’t part of their consensus reality, they insisted—but the Buffalo massacre looked to at least one among them, Eileen Rivers writing in USA Today, like an opportunity to announce that the killings happened because there wasn’t enough critical race theory being taught in the nation’s classrooms.

Another recent kerfuffle has concerned the rumored overturning of Roe v. Wade and, with it, legalized abortion as the law of the land. You might think it a bit far-fetched to try to connect this with the Buffalo shootings, but Brian Broome of The Washington Post is up to the task, noting that the majority of justices must have been motivated by a white-supremacist concern to increase the white birth rate—even though, proportionately, more black babies than white are aborted every year.

These are the kinds of things you can do when you’re operating, as the media are, from within a consensual reality: in this case the consensual reality of right-wing “white supremacism.” These are the kinds of things you will inevitably do when you belong to a party that believes, along with the former Obama chief of staff and onetime Chicago Mayor Rahm Emanuel, that you should “never let a crisis go to waste.”

It’s a recipe for the never-ending party strife and division that has gripped the country for most of the present century, since the short-lived patriotic consensus over the 9/11 terrorist attacks broke down. Perhaps this latest useful crisis, and the uses to which it has been put, will give you a pretty good idea of who is, mostly, responsible for that.