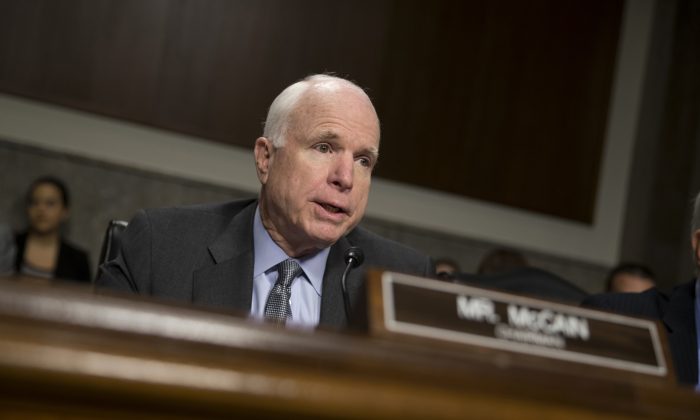 The Republicans on the Senate Armed Services Committee are joining with Democrats in calling for an examination of reports that Russia interfered in the presidential election.

Chairman John McCain, incoming Senate Democratic Leader Chuck Schumer and others said in a joint statement Sunday that the CIA’s report of Russia’s efforts in the election “should alarm every American.”

“I can’t reach that conclusion yet, which is why we need a bipartisan effort to uncover the whole situation,” said McCain on “CBS This Morning.”

“It’s all part of the larger issue of the cyber threat that we face from Russia, China and other countries. It’s another form of warfare,” he added. “It’s a threat to our national security.”

The leaders said they will push “to unify our colleagues around the goal of investigating and stopping the grave threats that cyberattacks conducted by foreign governments pose to our national security.” Russia was the only country mentioned in the statement.

“This is serious stuff—when a foreign power tries to intervene to influence an election,” Schumer said, adding that he doesn’t want the investigation to become politicized. “It’s gotten worse and a bipartisan investigation that’s not aimed at one specific instance but looks at the broad scope of this is just what’s needed.”

President Barack Obama ordered a full review of campaign-season cyberattacks to be completed before he leaves office. President-elect Donald Trump has dismissed the CIA’s assessment that Russia powered his defeat of Democrat Hillary Clinton.