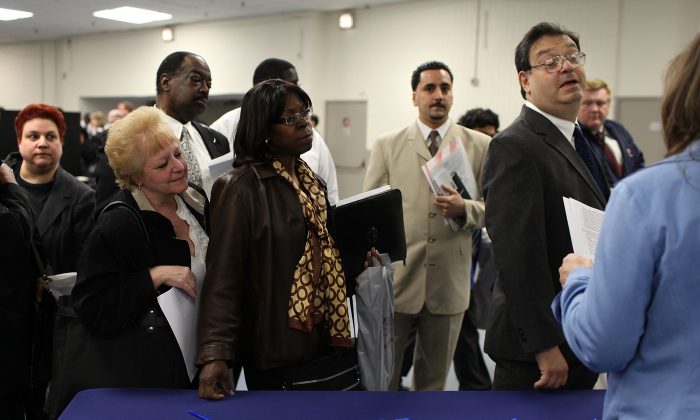 People looking for employment attend an AARP job fair with an emphasis on individuals 50 years old and over in New York City, on April 12, 2010 (Spencer Platt/Getty Images)
New York

NEW YORK—Senior citizens will make up nearly one-fifth of New York City in the next two decades, a trend in line with the graying demographics of the rest of the country,according to a new report by the AARP, the interest group for senior citizens.

The aging of the city will be attenuated by emigration as New Yorkers retire and seek cheaper housing elsewhere. Fifty-three percent of New Yorkers between 50 and 64 said they plan to leave upon retirement, and 54 percent of NYC voters cite lack of affordable housing as a major problem.

Despite the high rate of emigration, 90 percent of voters over 50 years old said that being able to stay in their current homes for as long as they like was extremely important.

The emigration would be a drain on the city’s economy, the report said. The wealthy age group accounted for $70 billion of consumer spending in 2011 alone.

“The age group contributes billions of dollars a year to the local economy, yet from age discrimination to affordability and the reality of being unable to retire; they are facing a unique set of challenges,” said Beth Finkel, director of the New York state AARP.

More than 1,300 registered NYC voters over the age of 50 were surveyed for the report, with a 2.7 percent margin of error.

For many New Yorkers, the lack of affordable housing is exacerbated by poor retirement planning. Over one-third of NYC households, where the head is near retirement age, have less than $10,000 in liquid assets. Such families will have to live off social security alone or delay retirement.

The lack of retirement-readiness is reflected in the survey, where only half said that they were confident about being able to retire. Only 16 were very or extremely confident they could retire comfortably.

Most seniors in New York City rely primarily on social security for their income. Fourteen percent of seniors work, and only a quarter draw income from pensions or employer-sponsored benefits.

Around 90 percent of New Yorkers over 50 years old have health insurance, with most of the uninsured composed of those under 65, who are not eligible for Medicare. Among those 65 and above, a little less than one-third receive Medicaid benefits.

In the 50–64 age bracket, Asians and Hispanics are disproportionately uninsured, at around 20 percent as opposed to 13 percent for blacks and 8 percent for whites.

Only around one-fifth of those surveyed said they were very confident about their ability to keep existing coverage at an acceptable cost over the next five years, in large part due to the uncertainty surrounding the implementation of the Affordable Care Act, or “Obamacare.”

Residents in the Bronx rated alternative transportation as excellent, at 37 percent, more frequently than residents in the other four boroughs, with Staten Island falling in last place at 27 percent.

Pedestrian safety remains an issue for seniors, who represent more than a third of NYC traffic fatalities, and more than half of those surveyed said that street intersections were inadequate.

Seniors and those near retirement have a higher rate of electoral turnout than average, and 50+ voters made up 54 percent of the votes in the 2013 mayoral elections.

Despite this, de Blasio’s term has seen few initiatives to improve the lives of seniors. The Long Island College Hospital has all but closed; the city has sought to raise taxes only when funding prekindergarten; and the administration has used surplus revenue from previous years to settle contracts with labor unions.