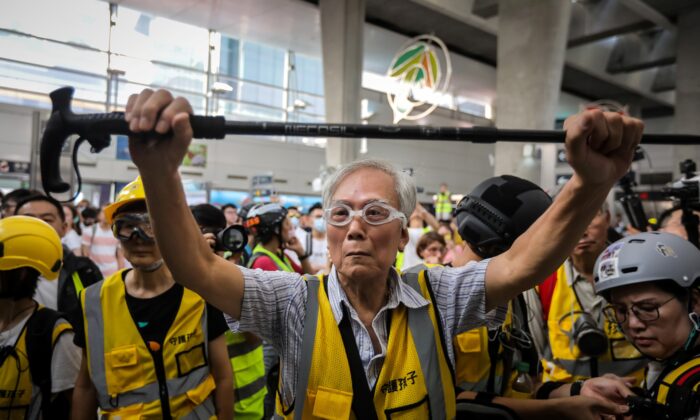 This picture taken on Sept. 7, 2019 shows "Grandpa Wong" (C), 85, shielding protesters from the police by holding his walking stick up along with other "silver hair" volunteers in the Tung Chung district in Hong Kong. Despite his age, Wong is a regular sight at Hong Kong's street battles, hobbling towards police lines, placing himself in between riot officers and hardcore protesters, hoping to de-escalate what have now become near daily clashes. (Vivek Prakash/AFP via Getty Images)
Chinese Regime

HONG KONG—In Hong Kong’s ongoing protest movement, there is an oft-repeated idiom that translates to “We all have a part to play in this fight.”

While protesters who are frequently at the frontlines facing off with police are mostly teens and young adults, there is a broad contingent of middle-aged and older Hongkongers who support the youngsters on and off the streets.

“Parents,” as they are referred to, drive to the sites of protests to pick up those who are being chased by police, pay for meals for protesters who lack the financial means, donate clothing and other supplies, and have organized an upcoming Christmas party to lift their spirits. Others find business owners who are sympathetic to the movement and are willing to provide jobs or skills training to young protesters in need of employment.

They contribute however they can, as if watching over their own children.

Ms. Masood, 66, is a “parent” who buys and carries supplies to major demonstrations, in addition to driving a “school bus” to pick up protesters during clashes with police. Though the young protesters at the frontlines appear very courageous, they tell her upon getting a car ride to safety that they feel less scared with her there.

“They’re very well-behaved,” she said, noting that the young boys usually suggest that the girls be driven home first.

Some young protesters have been kicked out of their homes due to divergent views from their biological parents regarding the political movement.

One 14 year-old protester told Masood that his parents told him if he didn’t pack his things and leave, they would report him to the police station for his protest activities. A protest supporter later took him in.

Telegram, an encrypted messaging app that has become a popular platform for Hongkongers to plan and discuss future demonstrations, is usually the platform for “parents” to spread information about efforts to assist young protesters in need.

One Telegram channel administrator recently shared about “parents” who threw a birthday party for two youngsters who were estranged from their family.

The administrator recounted that the young protesters cried. “Thank you for celebrating my birthday with me, to let me know I’m not alone,” the youngster had said.

One Telegram group recently decided to team up with a local shop in the Kwai Fong neighborhood to sell a special tea, made of osmanthus and pear, “to help soothe during this bout of dry weather, or for those who have breathed in gas they weren’t supposed to breathe in, or as an alternative to soda when you eat fried foods.”

Protesters can pay whatever they want; any profits are donated to a fund that provides meals to protesters in need.

Mr. Ma, 60, has bought meal vouchers for a few. He says the movement has “always been an all-of-society movement,” with the young protesters on the front lines playing a special role, sacrificing themselves by risking arrest and being beaten by police.

Hongkongers are like “frogs boiling in the water,” he said, referring to how some may not immediately perceive the threat of Beijing’s encroachment on daily life in the city. The youth have sustained a monthslong demonstration.

“The role they play is to awaken the others,” he said.

Ma had attended a rally in late November that was themed around the “silver-haired” showing solidarity with the youngsters.

In recent days, a growing number of restaurants have allied with “parents” to offer meals to youngsters. The “parents” are welcome to pay whatever they want; the restaurants will then donate the revenue to organizations that assist protesters.

Ms. Tam, 63, often goes to protest events and passes out a brand of Japanese cough drops that she says is known to relieve the effects of tear gas on the throat. She started buying them when she noticed that protesters who shout slogans during demonstrations would get hoarse from the constant yelling.

She also carries face masks for those who need them and is known to buy bread or water for protesters who are caught in long standoffs with police.

“I help them so they don’t waste their energy walking around. They need to run to escape [from police],” she said.

Mr. Chan, 64, admits that many in his generation are against the protest movement. Some of his oldest friends hold the view that social stability is more important. With Hong Kong undergoing the largest unrest in its history, they fear that their investments will suffer as a result.

“I personally would support [the protests] because it concerns the future of Hong Kong,” said Chan, who is retired. He believes that it’s necessary to stand up against the Chinese regime’s tightening grip on Hong Kong.

That’s gotten him into many heated arguments with those friends.

“It’s a matter of difference in one’s moral values.”