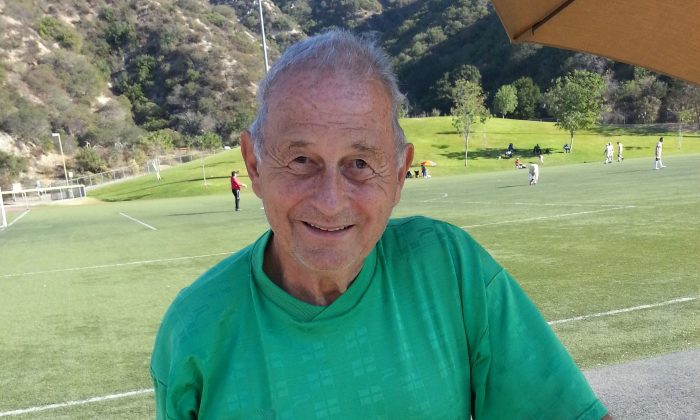 74-year-old Dick Jover gets his kicks, it could be said, from organizing the annual Thanksgiving Soccer Tournament, which was held in Glendale this year. The fundraising event featuring players as old as 86, aims to raise $5000 for charity. (Timothy Wahl)
US

GLENDALE, Calif.—It’s been said that winning isn’t everything, but that it’s how you play the game. Such an age-old mantra could well have been in play Thanksgiving weekend at the Community Sports Complex in Glendale.

It was not the type of sporting event to bring out the media nor was it one to elicit chants of “we’re number one” from the fans—the few in attendance who knew about this largely unpublicized event just gave a hoot to come out and holler. Nary a sound of “kill the ref” for a blown call or the “throw the bum out” for a player who botched a play, this soccer tourney was about pure fun, camaraderie, and fitness—and love of the sport—all for the sake of raising money for the Salvation Army Red Shield Youth and Community Center in Los Angeles.

Like cheese or wine, what made this tournament extra zesty was age. Those figures darting up and down the 100-yard soccer pitch weren’t your run-of-the-mill players. No, it was not an optical illusion but a real-life eyeful of gray-haired and bald-headed players as old as 86 mixing it up in a young person’s avocation, heading or kicking or dribbling or taking a crack at the goal. Call it soccer’s answer to sandlot football, albeit with a wink and a wrinkle.

This attraction, which had no prerequisites for participation except age, would have been just as right for a Pele or a Maradona as for the Grandpa Jones moseying about. Soccer neophytes as well as lifelong veterans of the sport got it going.

No trophy or bragging rights at stake, teams were divided into brackets according to age, 40, 50, 60, and 70 and up, 11 to a side. Each team “competed” for the purpose of sending money to the Red Shield in hopes of lifting up the lives of children normally at a disadvantage for play areas and organized recreation activities. The entry fee and funds from concessions of bananas, protein bars, water, and other healthy goodies comprised the fundraising proceeds. For two sun-up-to-sun-down days, old timers with gumption to get around got after the ball for 70-minute matches. The lone referee at each match kept score and time—and when not refereeing, he played when his bracket was summoned.

“Better than drugs; keeps me fit,” said Mikhail Relushchin, 49, while pointing out the trim figures in the surroundings. Hardly was there a sight of overweight bodies. “A good way to get a work out while raising money,” he added.

David Choi, a member of a team for 50 and up, celebrated the end of his game with a sushi and kimchi tailgate party. “Glad I’m getting to do something good doing something I enjoy,” Choi said, referencing the Red Shield charity.

Marcos Gaitán was one of two 86-year-olds in the tournament. Originally from El Salvador, where he said he grew up “with soccer in [his] blood,” the well-postured Gaitán called soccer his hobby. He attributed his longevity to the exercise he receives from soccer, in addition to his prudent eating decisions. Gaitán joins other players from 40 and up in informal contests at the sports complex during the week throughout the year. Groups play in early mornings as well as evenings.

Dick Jover and Joe Moses, co-organizers of the event, billed as the 10th Annual Thanksgiving Soccer Tournament, saluted the City of Glendale and the respective Los Angeles and Golden Oldies Soccer Clubs for their sponsorships. Jover also played in the tournament in the 70-year-old bracket and maintained the concessions table. “It’s for the kids, every red cent,” Jover said. The goal was to raise $5,000.

This was the first year the tournament was held in Glendale after moving from downtown L.A. due to construction and development taking over the former playing space, said Jover, who has also taken a 60-and-up group for competition in Korea. He added that he and Moses hope to make this Thanksgiving weekend tournament a regular happening in Glendale.

Overhead was at a minimum since participants also paid for their own uniforms and risk management was the responsibility of each participant, who signed an injury indemnification waiver.

One player in his 60s said he was not concerned about getting injured. Spotted rubbing a topical ointment on his knee after a match he explained: “[It’s] just the wear and tear from years.”

The tournament this past weekend may have produced no champion or MVPs, but it did produce winners who competed with themselves to stay healthy and fit while bringing a sense of inspiring awe to those of us who watched them play and learned of their mission of giving at Thanksgiving.

Tim Wahl, author of a memoir on his childhood farm life in New York State, teaches English-as-a-second language to adults in Los Angeles.