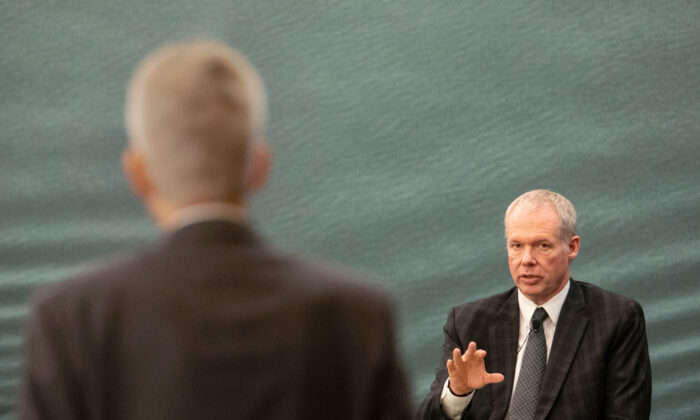 RCMP Chief Supt. Chris Leather is questioned by lawyer Thomas Macdonald at the Mass Casualty Commission inquiry into the mass murders in rural Nova Scotia on April 18/19, 2020, in Halifax on July 28, 2022. (The Canadian Press/Kelly Clark)
Canada

A senior RCMP officer has testified that lawyers from the federal Justice Department advised him not to disclose a call he received from Commissioner Brenda Lucki asking him to send her details of the firearms used in the mass shooting in Nova Scotia.

In his testimony on July 27, Chief Supt. Chris Leather told the Mass Casualty Commission (MCC) that he had received a call from Lucki on April 22, 2020—three days after the shootings that left 22 dead—asking him to send her details about the guns.

Leather’s statement about the call with Lucki, and about a series of emails that followed, didn’t come up in a July 6 interview he gave to commission lawyers.

During cross examination on July 28, Leather told Michael Scott, a lawyer who represents the majority of the victims’ families, that he hadn’t mentioned the call in the interview because he had been told by lawyers with the Justice Department to take a “reactive posture.”

“The advice I received was not to proactively disclose the conversation [with Lucki] and the emails leading up to the meeting on April 28, [2020],” Leather testified, after his request to have his solicitor-client privilege waived was granted.

“I knew from my notes and emails I had prepared and submitted that it was obviously relevant to what would become the infamous phone call of April 28, … and was troubled by that and wanted their advice and was advised to take a reactive posture,” he said.

Lori Ward, counsel for the Justice Department and the RCMP and one of the two lawyers who met with Leather, said there was a “misunderstanding” in regards to the advice they gave the chief superintendent.

“Shortly before his interview with commission counsel, [Leather] had raised a document of which we had no knowledge in the context of our discussions about the meeting with Commissioner Lucki,” Ward said.

“From his description of the document, we thought it was potentially relevant but possibly privileged, and based on assurance of confidentiality, given to those who are involved in the making of the document. As such, we told Chief Superintendent Leather we would obtain that document and review it and disclose it if it was relevant.”

“We’ve now reviewed it, and it will be disclosed imminently,” she added. “At no time did we advise Chief Superintendent Leather not to speak about it if it came up, and not to speak the truth.”

Commission chair Michael MacDonald said to Ward that he thought the issue “was proactive versus reactive,” not about whether to tell the truth or not.

Leather said the essence of the meeting with the two federal lawyers was to seek their advice on whether to proactively disclose the conversation he had with Lucki during his interview with the MCC lawyers.

He confirmed to Scott that he was concerned about how to address the issue if it surfaced in case he was seen to be “improperly holding back relevant information” critical to the investigation.

“It pertains to this very issue, post my interview, given my discomfort with how things proceeded and the fact that it didn’t surface during the course of the interview. And I felt I needed independent legal counsel to get advice on how to manage the situation on a go-forward basis,” he said.

Leather also told the inquiry on July 28 that he believes political interference was behind Lucki’s determination to have the firearms details made public to further the federal government’s gun control legislation.

“That’s my impression,” he said, during cross-examination by lawyer Tom MacDonald, who represents the families of two victims killed in the mass shootings.

Leather said he came to that conclusion after gathering the facts about the “lead-up” to the teleconference with Lucki on April 28, 2020, which his colleagues in H Division, then-Superintendent Darren Campbell and then-strategic communications director Lia Scanlan, also attended.

“I did not come away from that call immediately feeling that,” he said, explaining that he came to that conclusion after gathering the facts and conferring with Campbell and Scanlan.

“So to answer your question—not immediately. Subsequently, yes, when I gathered all the facts and had an opportunity to learn what had occurred in those final hours before that press conference of the 28th.”

Campbell, now chief superintendent, had recorded in his handwritten notes that during the meeting on April 28, 2020, Lucki said she had promised then-Public Safety Minister Bill Blair and the Prime Minister’s Office that information on the guns would be released, and that it was tied to “pending gun control legislation.”

In his notes, Campbell detailed his concerns that disclosing the weapon details to the public could “jeopardize” the investigation being carried out by the RCMP and U.S. law enforcement, which he reiterated during the public inquiry.

Scanlan provided a similar retelling of events in an email to Lucki sent a year after the tragedy.

Campbell’s and Scanlan’s recollections were publicly released by the MCC in June, which prompted the Conservatives to call for an investigation into alleged political interference.

Both Lucki and Blair have said there was no political interference in the investigation into the killings.

Noé Chartier and The Canadian Press contributed to this report