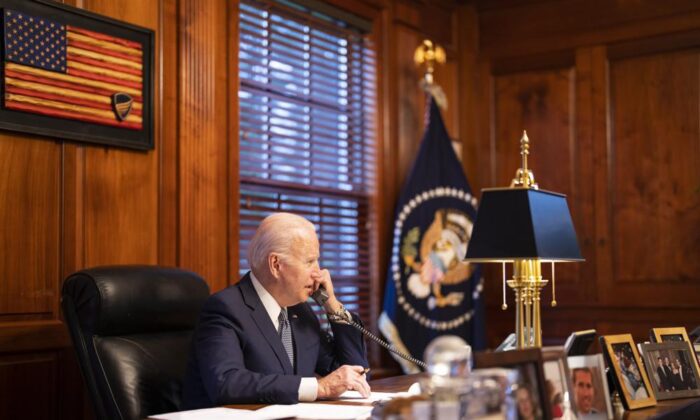 In this image provided by The White House, President Joe Biden speaks with Russian President Vladimir Putin on the phone from his private residence in Wilmington, Del., on Dec. 30, 2021. (Adam Schultz/The White House via AP)
Europe

U.S. Deputy Secretary of State Wendy Sherman and Russian Deputy Foreign Minister Sergei Ryabkov will lead security talks between the two nations in Geneva on Jan. 10 as international pressure mounts on Russia to deescalate tensions along the Ukraine border.

On Dec. 30, U.S. President Joe Biden and Russian President Vladimir Putin held a telephone conversation following Moscow’s request to constructively resolve issues based on mutual national interests. Russia has amassed 60,000 to 90,000 troops along the Ukraine border, alarming European powers and the NATO alliance. Putin is seeking legally binding security guarantees from NATO regarding weapons deployment and other expansions along its eastern border.

“During the talks, we will seek firm legal guarantees on Russia’s security from the U.S. side, namely that NATO will not move eastwards and that weapons systems threatening Russia will not be deployed near our borders,” Maria Zakharova, Russia’s foreign ministry spokesperson, said at a briefing on Dec. 30.

Meanwhile, during the recent 50-minute talk, Biden warned Putin that he may invoke sanctions along with an escalation of a U.S. presence if an attack is made on Ukraine. Moscow, which annexed the Crimea region in Ukraine in 2014, supports pro-Russian separatist forces within Ukraine who have been waging an almost eight-year-old war against Kyiv’s forces.

“I made clear to President Putin that if he makes any more moves, if he goes into Ukraine, we will have severe sanctions. We will increase our presence in Europe, with our NATO allies, and there will be a heavy price to pay for it,” Biden told reporters as he left a Wilmington, Delaware, restaurant.

More talks are expected in January and the leaders are looking for ways to solve the current predicament.

“Both leaders acknowledged that there were likely to be areas where we could make meaningful progress as well as areas where agreements may be impossible,” a senior administration official told Reuters. “The upcoming talks would determine more precisely the contours of each of those categories.”

Putin has made it clear that any sanctions that could include cutting Russia off the global financial system would receive an immediate response, and “could lead to a complete breakdown in ties between our countries,” according to Kremlin aide Yuri Ushakov.

Biden was to speak with Ukrainian President Volodymyr Zelensky on Jan. 2; officials said they would discuss the border crisis along with territorial integrity and preparations for possible engagements with Russia.

“As we have agreed with our Strategic Partner [the United States], nothing about [Ukraine] without [Ukraine]. Look forward to talking again with [Biden] this Sunday to coordinate our steps for the sake of peace in Ukraine and security in Europe,” Zelensky wrote in a tweet on Dec. 31.

While Ukraine wants to join NATO, the alliance claims the country has a long way to go before gaining membership, including internal reforms and implementing the rule of law. In addition, NATO would be stretched thin, and further resources would be needed to maintain security along Ukraine’s borders.

Russia will hold a session with NATO on Jan. 12 and a more comprehensive meeting including the United States, Ukraine, and other European nations on Jan. 13 in Vienna.