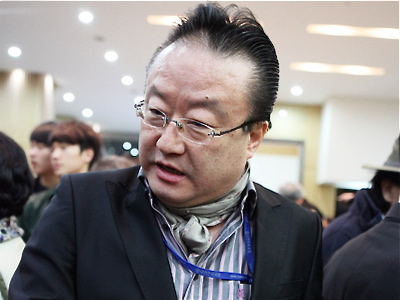 ANYANG, South Korea—Minister of the Political Department at Asia Times, Yeong-Su Li, had high praise for Shen Yun Performing Arts New York Company, performing at the Anyang Arts Center on Saturday evening, March 3. He said, “The performance was gorgeous. The scenes with performers interacting with the backdrop were especially unique, leaving me with a deep impression. After seeing the performance, I come to realize a never-before-seen technique in performing arts.”

Shen Yun’s animated backdrop expands and transforms the stage, “like magical windows to completely different realms-from vast open grasslands in one dance to the stately elegance of Tang Dynasty pavilions in another,” states the Shen Yun’s website.

Mr. Li commented: “To maximize the effects on stage, it is not a still image at the back, but an animated backdrop connecting to the stage. So the stage production was well done. The performance was superb, especially the backdrop. It was a mind-blowing new technology.”

In addition, Mr. Li said that Shen Yun had given him a golden opportunity to reflect on traditional Chinese culture, saying: “Even though I did not know much about Chinese culture, through this series of condensed and rich Shen Yun programs, I have come to realize the magnificent culture within the 5,000 years of Chinese history.”

The stories themselves also garnered acclaim from Mr. Li. Commenting on the final program, Before Disaster, the Divine is Rescuing, he said: “It seemed like an actual Buddha had walked onto the stage. I was so emotional. I believe that the scenes of this last program were very good. I don’t know how exactly, but I got a message, and that is the message of hope.”