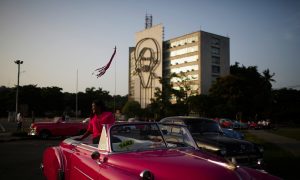 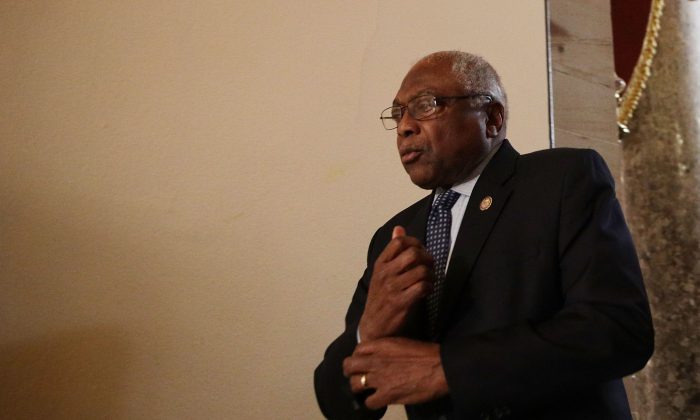 Highly influential Democrat and House Majority Whip Jim Clyburn (D-S.C.) compared the Trump administration to the rise of Nazism in Germany earlier this month. Clyburn told NBC News that though he’d never before seen a toxic political climate like the one at present, he’d “studied ones like it.”

Former President Barack Obama gushed over Clyburn, describing him as “one of a handful of people who, when they speak, the entire Congress listens.” As the No. 3 Democrat in the House, “Clyburn is the leadership liaison to the powerful Appropriations Committee and one of the Democratic Caucus’s primary liaisons to the White House,” according to his website.

“Adolf Hitler was elected chancellor of Germany. And he went about the business of discrediting institutions to the point that people bought into it,” Clyburn told NBC. “Nobody would have believed it now. But swastikas hung in churches throughout Germany. We had better be very careful.”

Clearly, Clyburn is worried that President Donald Trump, who has been supported by many prominent American Evangelical Christians, might become a dictator—though there is naturally no proof offered for this irrational allusion.

One suspects that Clyburn is more concerned about Trump’s “America First” agenda, because Clyburn seems to have little aversion to real dictators. In fact, Clyburn once collaborated with one of the worst dictators of the 20th century: Cuban communist leader Fidel Castro.

In May 2000, a group from the Congressional Black Caucus led by Clyburn visited Castro. Accompanying Clyburn were Reps. Bennie Thompson (D-Miss.) and Greg Meeks (D-N.Y.). Thompson reportedly described huge areas in his district where there were no doctors, and Castro responded with an offer of full scholarships for U.S. citizens to study at Cuba’s main medical school, Escuela Latinoamericana de Medicina (ELAM).

According to The Hill, “Clyburn praised Castro for his ‘great sense of history and a great sense of self.’ He added the Cuban leader was ‘very reflective’ and ‘a policy wonk'”—but perhaps forgot to add “communist dictator” and “mass murderer.”

Later that year, Castro spoke at the far-left Riverside Church in New York, reiterating his offer of places for U.S. students who would pledge to practice in poor U.S. communities on completion of their studies. Castro opened the doors of the program to 500 U.S. students, who began enrolling in the spring of 2001.

Writing in the Cuban Communist Party newspaper Granma on April 7, 2009, Castro gave his own version of the caucus delegation’s visit:

“In May 2000, another Caucus delegation visited us. It was presided over by the then Caucus President James Clyburn and was made up of Bennie Thompson from Mississippi and Gregory Meeks from New York. These congressmen were the first to learn from me of Cuba’s disposition to grant a number of scholarships to low-income youths, to be selected by the Congressional Black Caucus, so that they could come to Cuba and study medicine.

“When the anti-Cuban pressures and activities of the Bush administration were intensified with respect to travel and the presence in Cuba of persons under U.S. jurisdiction, Black Caucus legislators addressed Secretary of State Colin Powell and managed to secure a license that legally allowed American youths to continue their medical studies—which they had already begun—in Cuba.”

In other words, U.S. legislators pressured a Republican secretary of state to allow a hostile foreign dictator an opportunity to indoctrinate young Americans against their own country.

It’s not known how many Americans have graduated from ELAM, but student numbers were hovering around 80 to 90 per year in the late 2000s.

Some of the young medical trainees were radicals before they even traveled to Cuba. Many are the sons and daughters of Communist Party USA (CPUSA) members, including Jack Lubka (ELAM ’10), son of the late North Dakota communist Lewis Lubka, and Cori Marshall (ELAM ’12), daughter of prominent Chicago communist Scott Marshall.

The Cuban medical scholarships are coordinated through the late Rev. Lucius Walker’s Interreligious Foundation for Community Organization. Walker was a long-time CPUSA supporter and a lifelong supporter of Castro.

In 2010, Clyburn sent staffer David Francis Grimaldi, Jr., to Cuba for a three-day “fact-finding mission to understand the importance and culture of U.S. policy toward Cuba.” The same year he also sent staffer Adam Arguelles on a “fact-finding trip in Venezuela and other Latin American countries with the mission of fostering dialogue and improving U.S. policy and bilateral relations.” Both trips were paid for by the pro-Cuban nonprofit Center for Democracy in the Americas.

Like the vast majority of Americans, Clyburn clearly has no time for Nazi-style dictatorship. However, he seems perfectly willing to support and enable communist dictatorship.

There is zero danger of a fascist or Nazi takeover of the United States—any claims to the contrary are simply communist propaganda. However, America faces a major communist/socialist threat through the now-dominant left-wing of the Democratic Party.

Clyburn is in a position to know full well where the real danger lies. Didn’t Russian revolutionary Vladimir Lenin always tell his comrades to accuse their opponents of what they were doing themselves?