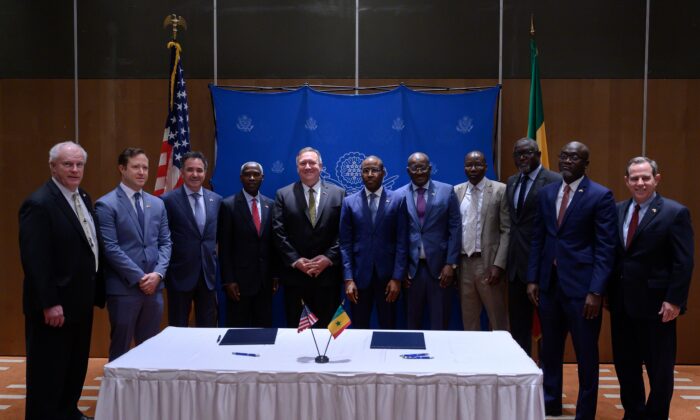 Senegal’s President Macky Sall and Foreign Minister Amadou Ba have expressed their desire that the United States will continue its military presence in the country to fight terrorism, amid growing concerns that American troops could be withdrawn from the region, Ba said at a joint press conference with U.S. Secretary of State Mike Pompeo on Feb. 16.

Ba said Senegal is determined to bring stability to the region and believes that African countries should first use their resources to fight terrorism.

“We respect the position of the United States,” and understand that each country should support itself, he said.

“It is urgent for Africa to put in place its own funding system for the accretion of agreement to enable an efficient intervention of the initiatives in the Sahel areas,” Ba said.

President Sall proposed that Senegal “should add 1 percent of the deficit” to their budgets and use these funds first to improve its internal security, Ba said, and only ask the international community and the United States for help to fill the gap between the needs and the country’s own funding.

However the country has no means to support two neighboring countries Mali and Burkina Faso, which also face terrorism threats, Ba said, with Senegal also asking the U.S. government to help fight terrorism in those countries.

U.S. Secretary of Defense Mark Esper told reporters at the Pentagon on Jan. 30 that the department was reviewing the U.S. military in West Africa and a reduction of forces is possible, but not a complete withdrawal. The total number of Department of Defense personnel currently stationed in Africa is 6,000, according to Military Times.

Pompeo said that “the Department of Defense is looking at West Africa to make sure we have our force levels right,” but did not provide a definitive response.

“Collectively Senegalese forces in the region, European partners, the French, and the United States of America, we have an obligation to get security right here in the region,” Pompeo said. He also promised to discuss the issue with Senegal and other countries in the region after the review is completed.

Training, logistic support, and intelligence provided by the United States plays a critical role in combating terrorism in the region, Ba said. ISIS terrorism endangers 350 million people in West Africa, and Senegal is an important ally in this fight, Pompeo said.

Pompeo called Senegal “an anchor for democracy” and “a linchpin for security” in Africa. Senegalese “are a tolerant people of all religions,” he added. Senegal is a peacekeeper in the region and helped its neighbor Gambia to transition to a democracy, he said.

Dakar, the Senegal’s capital, will host Youth Olympic Games in 2022 and ensuring security is especially critical to the success of this event.

Cooperation Between US and Senegalese Private Sectors

Pompeo and Senegalese Minister of Economy Amadou Hott announced the signing of five memoranda of understanding on cooperation and partnership in the areas of transportation, energy, healthcare, and social projects, between U.S. and Senegalese companies, as well as the Senegalese government.

American company Bechtel—one of the largest construction company in the United States—signed an agreement with Senegalese company Ageroute to build “a 170-kilometer [105-mile] highway from the Dakar metro area to Saint-Louis,” a project that “will create up to 4,000 Senegalese jobs and support more than 1,500 jobs in the U.S.” according to the announcement at the signing ceremony.

American company Weldy Lamont signed an agreement with a Senegalese private firm for “a project to extend Senegal’s electricity grid to rural and undeserved areas.”

Financing for infrastructure projects in Senegal will be provided by American firm ABD Group, which signed an agreement with Hott, according to the announcement.

“Our cordial relationships which have several achievements are characterized by a perfect convergence of views on several international issues, and we have—we share the same values of democracy and freedom and peace, former and constant partnership. We are still partners in several areas, namely development, health, education, and security,” Ba said.

Dakar is situated close to the westernmost tip of the African continent and is the closest point to the Americas.