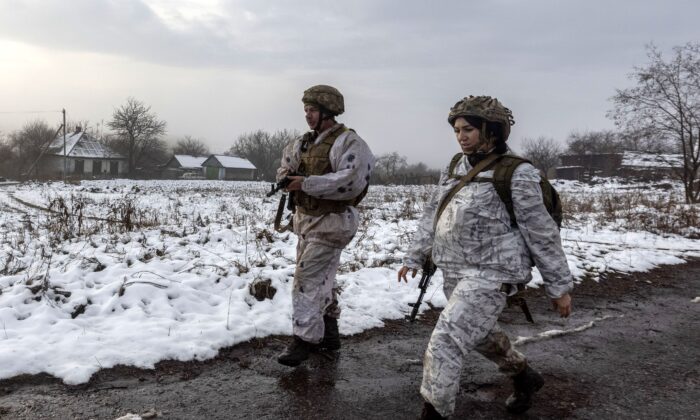 The Conservative Party has called Tuesday on the Canadian government to send weapons to Ukraine, as there are “more and more signs of a potential Russian invasion.”

“The time for waffling by Prime Minister Justin Trudeau must end,” MPs Michael Chong, James Bezan, and Pierre Paul-Husin said in a statement.

The MPs said a number of countries have already provided weapons to Ukraine, including the United States, the United Kingdom, and states formerly under Soviet control such as Poland, the Czech Republic, and the Baltic countries.

“That is why Canada’s Conservatives are again calling on Prime Minister Trudeau to immediately provide lethal defensive weapons to Ukraine, including the weapons originally destined for the Kurdish Peshmerga,” says the statement.

These weapons were mentioned in an Ottawa Citizen article on Jan. 24, which says they were promised to the Kurds in 2016 but were never sent due to opposition from the Iraqi government.

Many of these would not be compatible with Ukraine’s armament, which is of Russian or Soviet origin.

The cache was originally stored in Montreal, but a Department of National Defence (DND) spokesperson told the Ottawa Citizen the weapons have been moved to an undisclosed location, yet are still in Canada’s possession.

When asked recently in press conferences if Canada would send weapons to Ukraine, Trudeau didn’t say it wouldn’t happen.

“We know that they need other things. We are looking at what we can do to help more,” Trudeau said.

Canada announced last week it was offering a $120 million loan to Ukraine to strengthen its “economic resilience.” Loans totalling $400 million had been provided in 2015.

The news was welcomed by Ukraine, but its embassy in Canada specifically asked for additional support such as weapons.

The Conservative Party also called Trudeau to extend and expand the DND’s current training mission in Ukraine and to renew the provision of imagery from Canada’s satellite RADARSAT. The Conservative government had started this initiative in 2015 but it was stopped a year after due to the transfer of the surveillance data being tangled in red tape and bureaucracy, the Ottawa Citizen reported.

As Canada and other Western countries have been amping the Russia threat, Ukraine itself has been striking a reassuring tone after the United States announced the drawdown of its embassy and ordered the families of its diplomats to leave the country.

Ukrainian President Volodymyr Zelensky told his country in a televised address on Jan. 24 there was no reason to panic, and its deputy foreign minister said there aren’t enough Russian troops on its borders for a full-scale invasion.