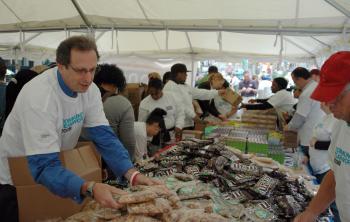 Send a Salami to a Boy in the Army

NEW YORK—The spirit of giving is alive and well in Manhattan. On Thursday the USO, a non-profit organization that supports U.S. troops with morale-raising initiatives, held an event in Times Square.

The USO was joined by local grocer Fairway Market to carry out Operation: Stuff the Square. The event is part of an effort by hundreds of people to send care packages to soldiers in the Middle East.

“This is the largest deployment of troops out of New Jersey since World War II,” said Brian Whiting, Executive Director of the USO. “The notes of appreciation we receive [for the care packages] from soldiers and their families make it worth the time and effort.”

Thursday’s event included a live performance by the Liberty Belles and a complimentary lunch for volunteers. Some of the volunteers work with the USO because they know from personal experience how difficult serving overseas can be.

“There’s a lot of young people out there and it must be lonely and hard for them,” said retired Army Sergeant Vinny Milo and USO volunteer. “I think it’s important to let them know we’re thinking about them and to remind them of home.”

“We are the largest supplier of care packages to the troops,” said Elisa Garyn of Fairway Market. According to Garyn, the market chain has been partnering with the USO for five years and “will continue to until the last soldier comes home”.

Fairway provides food which the USO sends to troops. Sudoku books, 1 lb. bags of M & M’s, encouraging notes from home, and DVD’s are a few additional items included in the large packages.

The USO has 132 locations worldwide and provides live satellite links for troops to communicate with family members face to face in real-time, entertainment, care packages, and other services. For more information look them up online at http://www.usonyc.org, or to donate food items, contact Fairway Market at http://www.fairwaymarket.com.