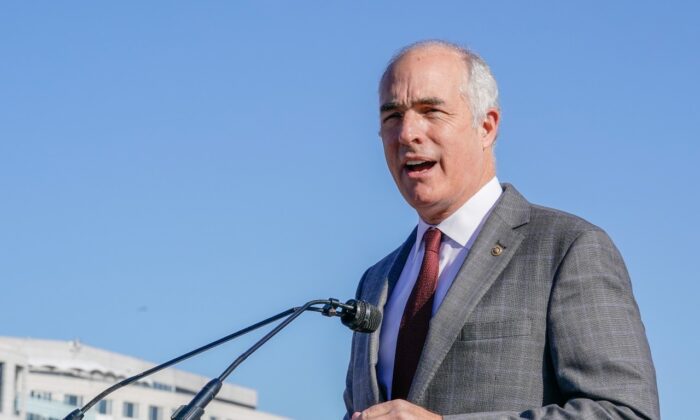 Michael Washburn
China Reporter
Michael Washburn is a New York-based freelance reporter who covers China-related topics. He has a background in legal and financial journalism, and also writes about arts and culture. Additionally, he is the host of the weekly podcast Reading the Globe. His books include “The Uprooted and Other Stories,” “When We're Grownups,” and “Stranger, Stranger.”
View profile
Follow
biggersmaller
Print

Two U.S. senators are pushing for greater scrutiny of U.S. companies looking to offshore critical capabilities to foreign adversaries, such as China, in a bid to protect the U.S. supply chain.

The pandemic’s sharp disruption to global supply chains has underscored the need for the United States to reduce its reliance on foreign competitors on critical supplies ranging from health equipment to natural resources, according to Sens. Bob Casey (D-Pa.) and John Cornyn (R-Texas), who earlier in 2021 introduced legislation aimed at addressing this issue.

“This is not just an economic issue. This is a national security and public health imperative,” Cornyn said during a Dec. 15 virtual event hosted by the Washington-based think tank Hudson Institute.

The senators described the measure, the National Critical Capabilities Defense Act, which was first introduced in May and has since been referred to the Senate Committee on Finance, as a necessary measure in the face of Beijing’s excessive and unfair utilization of investments from U.S. firms with resources that could be better be allocated domestically in the fight against COVID-19 and for other more legitimate purposes.

The need to establish something akin to the Committee on Foreign Investment in the U.S. (CFIUS)—an interagency group that screens foreign investments for national security risks—but for outbound rather than inbound investment, became particularly clear during the early days of the COVID-19 crisis, according to the senators. During that time, U.S. companies and hospitals struggled to meet the demand for beds, masks, gloves, gowns, and ventilators, while the Chinese Communist Party (CCP) tightened its control over the handling and supply of such critical gear.

The supply chain crisis afflicting the U.S. domestic economy in recent months is further evidence of the need for sensible reforms to prevent the CCP from unfairly benefiting from U.S. capital, know-how, and resources needed at home, according to the senators.

“All of us were horrified not just by the gravity of this pandemic, but by some of the challenges we faced at the very beginning,” Casey said.

Casey was quick to note that the legislation isn’t aimed at curbing free trade, which is essential to the health and stability of the domestic economy. Rather, it would establish a process with the highly specific aim of screening outbound investment within critical supply chains. It wouldn’t target investments in all foreign jurisdictions, but only those with which the U.S. finds itself in an adversarial relationship, such as Russia and China.

“It will require companies to disclose before they offshore to foreign adversaries,” Casey said. “It is designed to identify vulnerabilities, so that we’re not in the position that we were in when it comes to something as basic as personal protective equipment.”

According to Casey, U.S. firms active in such critical areas as homeland security, energy, agriculture, and natural resources would be required to report outbound investments to certain markets, namely China, and to report on any possible consequences of their investment could have regarding U.S. national security. The interagency committee established under the measure would have the power to block outbound transactions while reviewing them based on certain key factors already set forth by the bill’s drafters.

“The bill is very limited in scope,” he said. “It only covers foreign adversaries like China and Russia, looking only at national defense capabilities.”

Cornyn said the U.S. experience during the COVID-19 crisis has exposed critical vulnerabilities that make the country less secure and less self-sufficient. Examples include the shortage of ventilators for use in hospitals during the early days of the pandemic and, in the course of the ongoing supply-chain crisis, the lack of semiconductors has had adverse effects on everything from cars to fighter jets.

Another problem that the legislation would address is the tendency of some U.S. investors and investment firms to play into the hands of the CCP by directing funds to Chinese firms that serve the intelligence and military interests of Beijing.

Cornyn mentioned—but didn’t identify—a venture capital firm in California that he said is currently the largest shareholder in 4Paradigm, a Beijing-based artificial intelligence (AI) firm that takes on work for the Chinese military. He was likely referring to Sequoia Capital, which is 4Paradigm’s largest external shareholder. A November report revealed that 4Paradigm had been awarded a contract by Beijing’s military to enhance its AI capabilities.

A representative for Sequoia Capital previously told The Epoch Times that its investments in 4Paradigm were made by the Sequoia China branch, which declined to comment on the extent of its current holdings in 4Paradigm or whether it had knowledge of the contract with the Chinese military.

“So here, you have an American company investing in a contractor [doing work] in what has turned into a virtual police state, in which every move is followed and people are given scores based on their compliance with the CCP’s dictates,” Cornyn said.

“Our efforts are to try to make sure that the competition we have with China is fair and square and not based on either inadvertence by U.S. investors into China or strategic investments that can be leveraged [by the CCP] in national security competition with the U.S.”

Michael Washburn
China Reporter
Follow
Michael Washburn is a New York-based freelance reporter who covers China-related topics. He has a background in legal and financial journalism, and also writes about arts and culture. Additionally, he is the host of the weekly podcast Reading the Globe. His books include “The Uprooted and Other Stories,” “When We're Grownups,” and “Stranger, Stranger.”