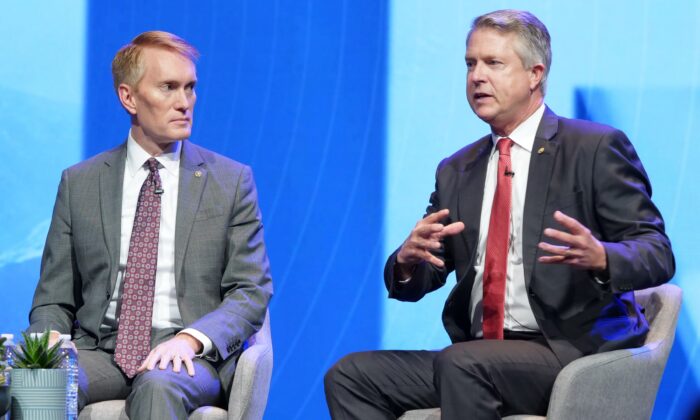 Two Republican senators vowed late on Oct. 6 to try again to bar the Department of Defense (DOD) from dishonorably discharging members of the U.S. military who decline to be vaccinated against the CCP virus, also known as novel coronavirus, the cause of COVID-19.

“You’re never going to be able to get a job again. You’re going to lose your Second Amendment [rights]. They’re going to take away your VA health care benefits and your education. It’s a big deal, is what I’m trying to say,” Marshall explained in response to a question from the moderator, FRC President Tony Perkins.

Marshall was referring to a Sept. 21 position statement issued by the White House saying the Biden administration “strongly opposes” congressional efforts to bar dishonorable discharges when service members decline to be vaccinated.

“You’re treated worse than a convicted felon,” added Sen. James Lankford (R-Okla.), who joined Marshall in the discussion with Perkins.

The U.S. military includes approximately 1.3 million active-duty members, as well as an estimated 800,000 reservists subject to immediate call-up. More than 700,000 Americans have died as a result of the CCP virus, with slightly more of the fatalities coming in 2021 than in 2020.

Marshall noted that votes will be taken later in October in the Senate on the National Defense Authorization Act (NDAA), and he plans to introduce an amendment removing the dishonorable discharge option from the available disciplinary measures that military leaders can impose on unvaccinated subordinates.

“The National Defense Authorization Act will be coming up for a vote probably the end of this month, and we’ll be offering an amendment just like we did on the continuing resolution to stop that nonsense. And we’ll need to activate your folks to help us out,” Marshall said.

The FRC summit attendees are concerned citizens from across the country who tend to be actively involved in public policy discussions and advocacy at all levels of government.

Secretary of Defense Lloyd Austin issued an Aug. 24 order requiring all service members to be vaccinated, using the vaccine developed by Pfizer. While Austin said President Joe Biden supported the decision, it’s been unclear whether service members would face a dishonorable discharge as a potential penalty.

“Taking a vaccine is a requirement. I’ll just leave it at that,” Austin replied.

Nearly 96 percent of all active-duty personnel have received at least one dose of the vaccination, and more than 79 percent have received both shots, he said.

Lankford said he’s hearing from service members that military commanders in each of the five branches are often taking differing approaches on the vaccine issue.

“This is an issue all of us have been engaged in. So, as crazy as this sounds, the Air Force is handling this differently than the Army is handling it than the Navy is handling it. They don’t even have consistent policy agency to agency and even within the Pentagon.

“So when I talk to the Army, they’ve set their policies—and I’ve talked to the chaplains there, I’ve talked to the surgeon general there, the leadership for manpower—they’ll say, there’s no way we’re going to do a less than honorable discharge. We’re not going to do that. We’re just going to say you can’t get promoted anymore. You’re stuck at that level.

“The Navy and the Air Force will say, well, we wouldn’t give a dishonorable discharge, but we’d give a less than honorable discharge as a possibility. Basically, you’re kicked out and you lose some of your benefits.”

Marshall and Lankford were joined by Sen. Ted Cruz (R-Texas) and Tuberville at the end of September in a failed effort to amend a Continuing Resolution to keep the government open.

On the House side, Rep. Mark Green (R-Tenn.) authored an amendment in the House Armed Services Committee that had support from both sides of the aisle, but the proposal wasn’t adopted.

The issue continues to boil in Congress, however, because of recurring reports of service members being threatened with dishonorable discharges. Two service members have filed a federal lawsuit naming Austin, Secretary of the Department of Health and Human Services Xavier Becerra, and FDA Acting Commissioner Janet Woodcock.

The service members argue that the Pfizer vaccine being required by the Austin order is based on an FDA authorization for its use on an experimental basis. Federal law requires that individuals can’t be required to undergo treatment with an experimental drug. Days after they filed their suit, the FDA gave full approval to the vaccine.