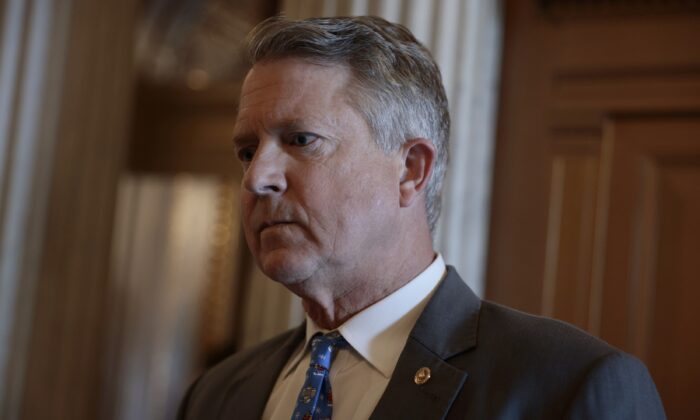 Senators Urge US Agency to Suspend Funding to EcoHealth Alliance

A group of senators is urging a U.S. agency to suspend its funding to the nonprofit that funneled money for years to a laboratory in China.

Sen. Roger Marshall (R-Kan.) and eight colleagues called on Samantha Power, administrator for the U.S. Agency for International Development (USAID), to suspend money from three grants that total millions of dollars to EcoHealth Alliance, the New York-based nonprofit that has a close relationship with the Wuhan Institute of Virology.

“USAID is empowered through federal laws and policies to immediately suspend its awards to EcoHealth,” Marshall and the other senators wrote (pdf) to Power, a Biden appointee, on Sept. 14.

They cited federal law that enables the suspension of awards when it is deemed to be in the public interest.

“It is therefore incumbent upon USAID to be responsible stewards of U.S. taxpayer funds, help protect foreign researchers from risk, and immediately suspend all awards to EcoHealth. The suspension will allow time for USAID to investigate EcoHealth’s oversight of foreign research programs, to include taking inventory of laboratory accidents and adverse events resulting in researcher illness, recordskeeping audits, and assurance that EcoHealth is compliant with federal award requirements,” they wrote.

USAID did not respond to a request for comment. EcoHealth did not return a query.

EcoHealth was the recipient of dozens of grants over the years, with 13 still active, according to the U.S. grant database. The main one from USAID, 72066921CA00006, is for $4.7 million to “support long-term and equitable economic growth and advance U.S. foreign policy objectives by supporting economic growth, agriculture and trade; global health; and democracy, conflict prevention and humanitarian assistance.”

EcoHealth also receives money as a subrecipient from USAID through two other grants.

The National Institutes of Health (NIH), which awarded several of the active grants, recently ended the subaward that EcoHealth gave to the Wuhan lab because Chinese officials refused to provide requested records to U.S. officials.

The agency, however, is allowing EcoHealth to correct failures and keep the award.

The Department of Defense’s Defense Threat Reduction Agency (DTRA) and the National Science Foundation awarded the other active grants to EcoHealth.

The other grants are for work including research on “zoonotic spillover risk,” Nipah virus dynamics and genetics in bat reservoirs, and reducing emerging health threats in Tanzania.

A spokesman for DTRA, which has the most active awards for EcoHealth, declined to immediately comment on whether the agency would be examining the awards in light of the nonprofit’s noncompliance with the NIH.

EcoHealth’s violations included failing to allow access to the Wuhan Institute of Virology’s (WIV) records and financial statements. EcoHealth has maintained it did not possess the records, a claim the senators questioned in the new letter.

“Despite representing to NIH that they had no WIV records, EcoHealth as a PREDICT consortium partner reported in 2020 accomplishments that through the fall of 2019, they trained 80 Chinese scientists, sampled over 7,300 animals and people, and strengthened the WIV laboratory and the Institute of Microbiology by conducting 39,137 tests of viral pathogens,” the group said, pointing to a report (pdf) from the researchers.