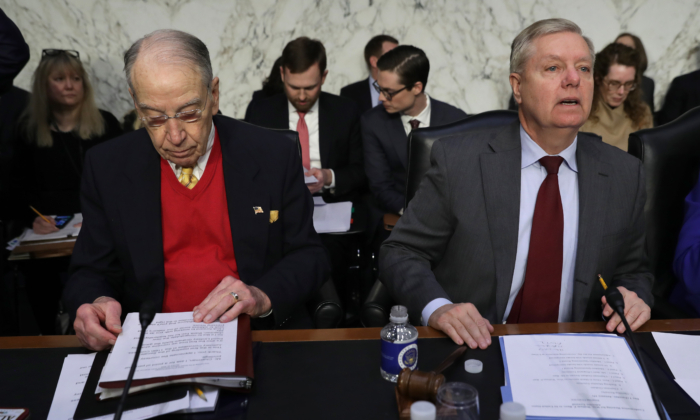 Chalupa and Telizhenko were reportedly involved in Ukraine’s effort to sabotage the campaign of Donald Trump in 2016, according to an extensive investigative report by Politico. Grassley cited the Politico report in July 2017, when he sent the first in a series of requests related to Ukraine’s alleged interference in the 2016 election.

Ukraine’s alleged election interference in 2016 is one of the topics within the scope of the House impeachment inquiry. Democrats running the inquiry have repeatedly employed the strawman argument that Trump and Republicans are promoting a “debunked conspiracy theory” that Ukraine, not Russia, interfered in the 2016 election. Neither Trump nor Republicans have promoted such a theory, but have instead alleged that Ukraine may have interfered in addition to Russia.

“Contrary to the popular narrative in the ‘main stream media’ that Ukrainian involvement in the 2016 election has been debunked, or ‘no evidence exists,’ there are many unanswered questions that have festered for years,” Johnson said.

Late last month, Grassley, Johnson, and Graham sent individual rounds of document requests to the National Archives, the Financial Crimes Enforcement Network, and the State Department related to Ukrainian gas company Burisma and Hunter Biden, the son of former Vice President Joe Biden. The senators’ Dec. 6 inquiry was presented in a single announcement, suggesting that the three committee chairmen have combined their efforts.

“While there was no collusion between the Trump campaign and Russia, we know that Russia meddled in our democratic processes,” Grassley said. “However, certain reports of collusion and interference involving Ukrainian officials have not been sufficiently examined, and the few answers that have been given are inadequate.”

During a July 25 call with Ukrainian president Volodymyr Zelensky, Trump brought up Hunter Biden and Ukraine’s interference in the 2016 election as two issues that Kiev should “look into.” The Democrats allege that Trump’s request amounted to soliciting a foreign power to interfere in the 2020 election on Trump’s behalf. Trump has repeatedly denied the allegation.

House Democrats on Dec. 3 issued a report summarizing the findings of the impeachment inquiry. They allege Trump abused his power by seeking Zelensky’s help in the 2020 election in the form of investigations into Biden and the Democrats coordination with Ukraine in 2016. The Democrats’ case rests entirely on hearsay and presumptions, according to a report prepared by Republicans.

In the days leading up to the senators’ document request, Telizhenko met with Trump’s personal attorney Rudy Giuliani in Ukraine. Giuliani interviewed Telizhenko as well as other former Ukrainian officials as part of a trip to Europe. The interviews were to be aired on the One America News Network on Dec. 7 and 8.