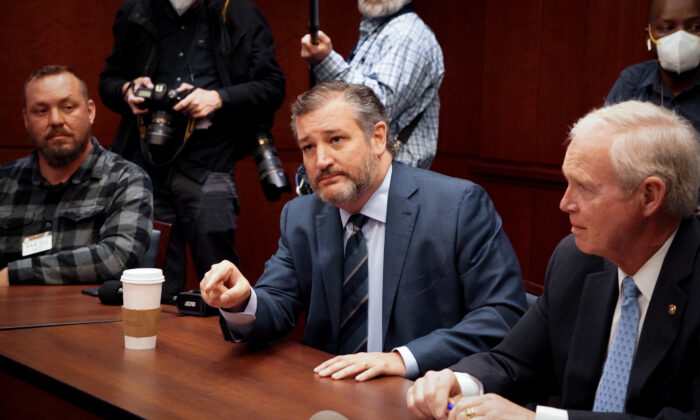 WASHINGTON—Sens. Ron Johnson (R-Wis.) and Ted Cruz (R-Texas) on March 8 praised The People’s Convoy for “fighting for freedom” and “awakening Americans” during their meeting with leaders of the group, which traveled across the country from California.

Johnson said the truckers are taking “extraordinary measures” to “get the unbiased news out.” To him, what the convoy is trying to convey is to “lay out the damage being done by these emergency orders [and] all these mandates,” he told The Epoch Times.

Doctors, nurses, truck drivers, and grocery clerks are heroes who kept the U.S. economy going early in the COVID-19 pandemic, Johnson said. Unfortunately, they weren’t a part of the workforce that could work on virtual platforms and be immune from lockdowns and mandates, he said, lamenting that these workers were being fired from their jobs because they chose not to comply with COVID-19 vaccine mandates.

The convoy left from Southern California on Feb. 23 and arrived in the Washington area on March 4.

The group is protesting against vaccine mandates, President Joe Biden’s continuation of the COVID-19 national emergency, and other issues.

At least 1,000 vehicles are estimated to be part of the convoy, which circled the Capital Beltway for the third day as its leaders met with the senators.

A statement from Johnson’s office announcing the event said the senators would be meeting with convoy organizers “to discuss the harmful effects of President Biden’s vaccine mandates.”

Brian Brase, a co-organizer who drives trucks in Ohio, told reporters after the meeting that “we’re not going anywhere.”

“We’re going to keep looping the Beltway until we’re heard,” he said, referring to the 64-mile road that encircles Washington and primarily runs through Maryland and Virginia.

Organizers later met with Reps. Matt Gaetz (R-Fla.) and Marjorie Taylor Greene (R-Ga.), and hope to hold more meetings with members of Congress as well as the White House.

“People can peacefully express their First Amendment freedoms in the District of Columbia, but there are certain things that we’re not going to tolerate,” he said.

Dr. Paul Alexander, part of the convoy delegation, told The Epoch Times that the meeting with the senators was excellent and went well. He expressed hope that the two senators would spark a discussion in Congress for rolling back the emergency declaration and the mandates.

The Senate has recently approved legislation to block enforcement of Biden’s mandate for health care workers—one of the few not blocked by courts—and declare an end to the emergency, but the Democrat-controlled House of Representatives isn’t expected to take up the measures.

The White House said the latter bill would be vetoed if the House does approve it, and without strong Democratic support, Congress doesn’t have enough votes to override a veto.

Democrats have largely expressed opposition to the convoy and others like it, including similar groups that protested earlier this year in Canada.

Ron Coleman, another member of the U.S. convoy delegation, shared touching notes he received along the way. He recalled how a little girl hugged him and gave him a handwritten crayon note that said, “We love you, truckers. Thank you for fighting for our futures.”

A mother of three was said to have written: “Dear truckers, I admire your courage and your determination in doing this. I will support you and pray for you. Thank you for fighting for all of us.”

Coleman said he was determined to take people’s messages, tears, hearts, and love, and “let them be heard.”

Dr. Pierre Kory, a member of the convoy, told The Epoch Times: “We are calling attention to a critical ill in society” and said the emergency declaration “is propagating policies which have hurt America.”