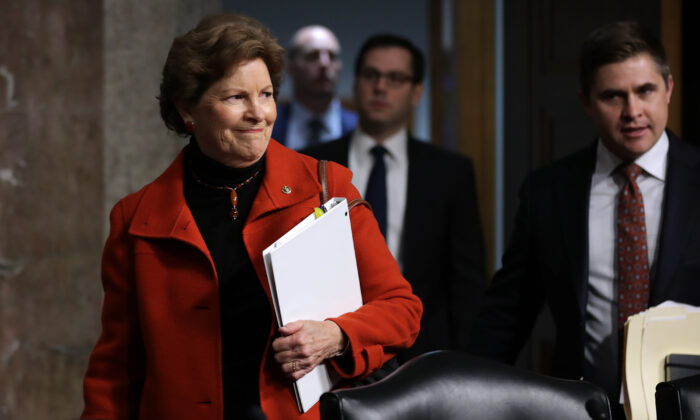 “U.S. investors, including the government-managed retirement savings of U.S. service members and other federal employees, should not fund Chinese state-owned or state-directed companies involved in the Communist Party’s military, espionage, human rights abuses, and ‘Made in China 2025’ industrial policy—Chinese activities that run directly counter to our nation’s safety and prosperity,” Rubio told The Epoch Times on Oct. 3.

The FRTSB was formed as part of the Federal Employee Retirement System under President Ronald Reagan.

The two senators recently challenged FRTSB Chairman Michael Kennedy and his board “to reverse its November 2017 decision to change the Thrift Savings Plan’s International Stock Fund (TSP’s I Fund) to mirror the MSCI All Country World ex-U.S. Investable Market Index (ACWI ex-US IMI).” The challenge was contained in an Aug. 26 letter.

The MSCI Index is one of the numerous stock market investment tools used by individuals and retirement plan administrators in private and public sectors to direct participants’ funds into selective groups of individual equities, thus, at least theoretically, spreading risks and minimizing potential losses.

Rubio and Shaheen contended the board’s move “to track this MSCI index constitutes a decision to invest in China-based companies, including many firms that are involved in the Chinese government’s military, espionage, human rights abuses, and ‘Made in China 2025’ industrial policy, and therefore poses fundamental questions about the Board’s statutory and fiduciary responsibilities to American public servants who invest in federal retirement plans.”

Rubio and Shaheen said moving the government retirement program’s funds “will expose nearly $50 billion in retirement assets of federal government employees, including members of the U.S. Armed Forces, to severe and undisclosed material risks associated with many of the Chinese companies listed on this MSCI index.”

There are significantly more risks of financial fraud and deceit with “companies listed on Chinese exchanges, which are not transparent or subject to the disclosure requirements that American companies must abide by,” the senators wrote.

A major concern of the senators is whether federal retirement officials performed sufficient due diligence concerning many Chinese firms included in the index whose financial and other records are purposely designed to conceal their activities.

Among the examples cited by the senators to Kennedy was AviChina Industry & Technology Ltd., which represents the Aviation Industry Corp. of China (AVIC) and its many subsidiaries.

The U.S. Trade Representative (USTR) described AVIC as “the sole domestic supplier of military aircraft to the People’s Liberation Army (PLA),” the senators said, and AVIC has been subject to “repeated sanctions for proliferation activities related to the Iran, North Korea, and Syria Nonproliferation Act and other statutes.”

Rubio and Shaheen asked, “What criteria were used to identify and evaluate the suitability of a new index … and to what extent was due diligence related to security, human rights, and financial transparency performed by the Board? What criteria did the Board use when deciding that federal employees and military personnel should be investing in Chinese military modernization?”

The senators also asked Kennedy if the board plans to warn FRTSB participants that their savings would be invested “in companies involved in the build-up of the People’s Liberation Army’s conventional and nuclear-related military capabilities, as well as firms responsible for the Chinese Government’s Orwellian surveillance and egregious human rights abuses against Uighur Muslims and other religious and ethnic minorities in Xinjiang?”

Kennedy didn’t directly address in his Sept. 5 reply the multiple issues raised by the senators in their letter, saying simply that “we are taking this opportunity to consider all relevant information to ensure we reach a prudent decision.”

Kennedy also told Rubio and Shaheen that the FRTSB directors had retained an investment consultant to review the controversial index. The consultant’s report will be reviewed by the directors at their Oct. 21 meeting.