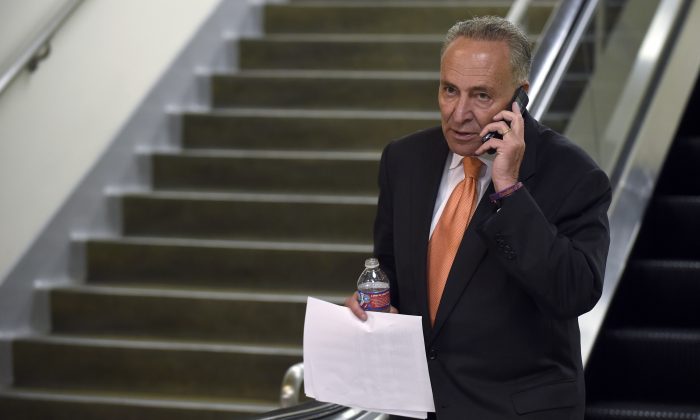 NEW YORK—Sens. Charles Schumer (D-N.Y.) and Richard Blumenthal (D-Conn.) are set to sponsor a Senate bill to lower the cost of pet medication.

The Fairness to Pet Owners Act, which was introduced in the House of Representatives in February, would require veterinarians to provide copies of prescriptions to pet owners, so that they could get medication from pharmacies or online drugstores.

In New York, prescriptions are not given to pet owners unless they ask for them. Many people buy drugs directly from the vets at a markup.

“Pet owners will do almost anything to care for their furry or feathered members,” said Schumer. “But often it can break the bank.”

The senator noted that people often pay for pet drugs at a markup of over 240 percent from wholesale prices, and that the bill could save pet owners as much as $250 million each year in New York state alone.

“I wasn’t really aware as a consumer that I could ask the vet. But maybe now when the vet gets me medication, I’ll ask for a prescription [and] send it to 1-800-PetMeds, which is a lot cheaper,” she said.

Timothy Moore, 27, was also walking his dog in the park. His 1-year-old Maltese-Yorkshire terrier recently had an ear infection, and he purchased the medication from the vet.

“The vet just wrote it out and gave us the drug at the office, and we had to pay for it there,” he said. “They didn’t tell us if we had an option. I didn’t think to ask.”

The senators scheduled their press conference next to the dog run in Washington Square Park, and never missed an opportunity to employ a pet-related metaphor.

“The markups can put cash-strapped pet owners in the financial dog house,” Schumer told reporters. “The bill would ensure that a trip to the vet will be like a walk in the park.”

“Too many pet owners are leashed to their vets. Too many consumers are caged by vets who charge them as much as 240-percent markup from wholesale drug prices,” Blumenthal said.

The bill parallels a 2004 law that required optometrists to give patients copies of contact lens prescriptions and drove down prices by 20 percent, Blumenthal added.

The American Veterinary Medical Association could not be immediately reached for comment on the bill. It opposed the House bill, stating on its website that it would prevent vets from charging for the prescription or asking pet owners to sign liability waivers for the prescription.

Only two states require veterinarians to provide prescriptions. In 17 states, including New York, pet owners can obtain a prescription upon request, and 31 states have no requirements for vets to release prescriptions.