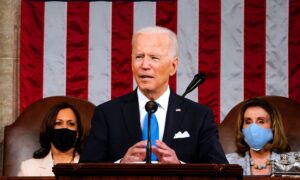 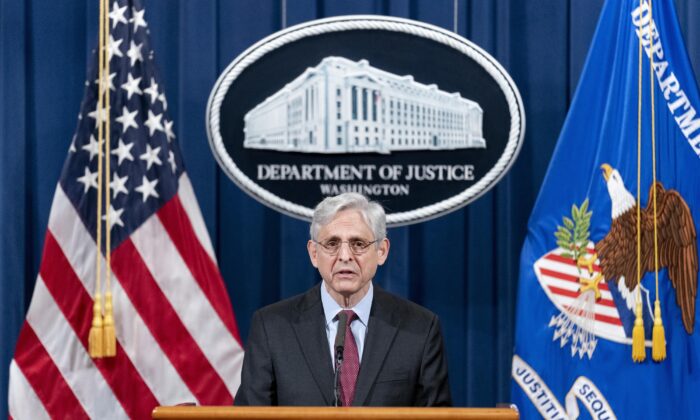 Attorney General Merrick Garland is seen at the Department of Justice in Washington on April 21, 2021. (Andrew Harnik/AP Photo)
Congress

Senators Object to Amnesty for Academics Funded by China

Eight Republican senators aren’t happy that the Department of Justice (DOJ) is moving forward with amnesty for researchers who admit getting past funding from foreign sources.

“America’s successful research enterprise is built on reciprocity, integrity, and transparency. These values foster a free exchange of ideas and ensure that researchers and institutions receive the benefit of hard work,” the senators told Attorney General Merrick Garland in a May 5 letter made public on May 6.

“As a result, America attracts the best and brightest. It needs to stay that way. But the United States must also take reasonable steps to protect taxpayer-funded research from theft, diversion, and ultimately weaponization against our own long-term national interests.

“This is a complex problem, but an amnesty program rewarding individuals who broke federal law to steal U.S. taxpayer-funded research is simply not the answer.”

Signers of the letter include Sens. Marco Rubio of Florida, John Cornyn of Texas, Charles Grassley of Iowa, Tom Cotton of Arkansas, Susan Collins of Maine, Ben Sasse of Nebraska, Todd Young of Indiana, and Rob Portman of Ohio.

Their letter was prompted by information the senators didn’t describe to Garland, but that suggested to them that the DOJ is launching in a few weeks the amnesty program first reported in January by The Wall Street Journal.

The senators noted that “DOJ has not consulted with Congress on this amnesty program. It is also our understanding that DOJ did not properly consult with the relevant Inspector General community.”

“Inspectors General from large grant-making agencies, such as the National Science Foundation and the National Institutes of Health, are on the frontlines of combatting grant fraud by corrupt researchers seeking to take advantage of the openness and funding that the U.S. research enterprise provides,” they wrote.

More than a dozen cases have been filed in recent months by the DOJ against researchers who failed to disclose their foreign funding sources for projects involving sensitive U.S. technologies, including several involving China.

The senators told Garland they’re worried “about the effect that this amnesty program will have on those ongoing criminal cases and the signal that it sends to future researchers contemplating breaking U.S. law to steal research or hide affiliations with foreign governments or militaries.”

They pointed as an example to a January DOJ announcement of charges being filed against Dr. Gang Chen, an MIT professor who was indicted for failing to disclose “various appointments with the PRC … often in exchange for financial compensation,” and “was serving in several advisory roles for the PRC and PRC entities [when he] applied for and obtained a U.S. Department of Energy (DOE) grant in order to fund a portion of his research at MIT.”

At the time of Chen’s arrest, The Epoch Times reported that he “has pleaded not guilty and is supported by MIT [and] is not the only prominent academic figure to be arrested and charged with failing to disclose connections to Chinese research institutes.”

“At least half a dozen have been arrested in the last year or so. They include Charles Lieber, the chair of the Harvard University Chemistry Department, who is accused of concealing his participation in an ambitious, state-sponsored Chinese effort to recruit top scientists and engineers from around the world to work in China,” The Epoch Times wrote.

The senators are also worried that the DOJ program will undercut recent efforts by Congress and the Trump administration to deter Chinese theft of U.S. research and technology.

“In section 1299C of the National Defense Authorization Act (NDAA) for Fiscal Year 2021, P.L. 116-283 (Jan. 1, 2021), Congress required the Secretary of Defense and other government agencies to work with higher education institutions to limit foreign influence and exploitation of U.S. technology within the Department of Defense research, science and technology, and innovation enterprise,” the letter to Garland says.

“In addition, section 1281 of the NDAA for Fiscal Year 2020, P.L. 116-92 (Dec. 20, 2019) built on a provision from the prior year’s NDAA, requiring the Secretary of Defense and other government agencies to provide training and resources to limit foreign influence, protect national security information, and protect against threats to institutions of higher education, including counterintelligence information developed for academic researchers based on identified threats.”

The senators requested a briefing “detailing the scope, nature, and timeline of DOJ’s amnesty program by no later than May 12.” The short timeline for the briefing is unusual, as such congressional requests typically allow two or more weeks for fulfillment.

A DOJ spokesman didn’t immediately respond to a request by The Epoch Times for comment.