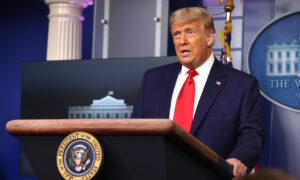 Senators from both sides of the aisle have expressed concern over President Joe Biden’s move to replace most Trump-appointed federal prosecutors without consulting home state senators.

This comes after the Justice Department (DOJ) announced that it’s beginning a transition process for Senate-confirmed U.S. attorneys.

Most U.S. attorneys have been asked to hand in their resignation earlier this week, several media outlets reported, citing DOJ officials. But Delaware U.S. Attorney David Weiss, who is overseeing the tax probe of Hunter Biden, and John Durham, who has been appointed as special counsel to investigate the origins of the counterintelligence probe into Trump and Russia, are expected to remain in office.

Illinois Democratic Sens. Dick Durbin and Tammy Duckworth said in a statement on Feb. 9 that they were disappointed by the Biden administration’s decision to replace U.S. Attorney John Lausch, who’s been serving as the top federal prosecutor for the Northern District of Illinois since 2017.

“While we agree with the Biden Administration’s criminal justice agenda, we are disappointed with the decision to terminate U.S. Attorney Lausch without consulting us. In 2017, our non-partisan screening committee gave its support for Mr. Lausch to serve in this position, and the Senate confirmed him unanimously,” the senators wrote.

“While the President has the right to remove U.S. Attorneys, there is precedent for U.S. Attorneys in the Northern District of Illinois to remain in office to conclude sensitive investigations. We believe Mr. Lausch should be permitted to continue in his position until his successor is confirmed by the Senate, and we urge the Biden Administration to allow him to do so.”

“It is unfortunate that you are taking these actions without replacements announced. It is also concerning that your administration did not consult with homestate Senators about this decision and that some of these U.S. Attorneys may be involved in sensitive investigations,” Grassley wrote (pdf).

He argued that although Biden is entitled to reshape his administration, in the interest of the rule of law, he urged the president “not to simply fire all of President Trump’s U.S. Attorneys except for the two most obviously sensitive—Durham and Weiss.”

“Take the time to do it right. See who has important investigations ongoing—like Lausch—and make sure that the American People have confidence in the independence of the Department of Justice,” he said.

White House press secretary Jen Psaki confirmed the administration’s move to replace federal prosecutors during a Feb. 9 press conference, saying that Biden is looking forward to working with the Senate to quickly fill the vacancies in the coming weeks. She also confirmed that Weiss and Durham will remain in office.

“The president has also made clear that he wants to restore the independence of the Department of Justice and to ensure it remains free of any undue political influence. That will be helped when our attorney general is of course confirmed. But the decision to leave two U.S. attorneys in their roles is a reflection of that commitment,” Psaki said.

Former presidents have also asked U.S. attorneys to resign, although some did so over a broader time period. The practice of removing U.S. attorneys has repeatedly garnered widespread scrutiny. But previous administrations have defended the move saying that it’s a tradition for new presidents.

President Bill Clinton demanded the resignation of all 93 attorneys after he took office in 1993. Similarly, Presidents George W. Bush and Barack Obama also replaced top federal prosecutors, but over a longer period of time. President Trump asked 46 to resign in 2017.