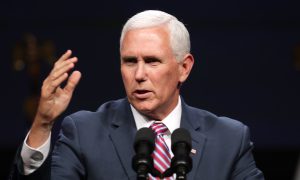 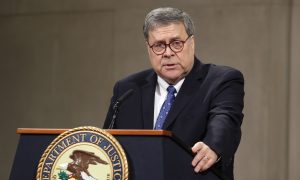 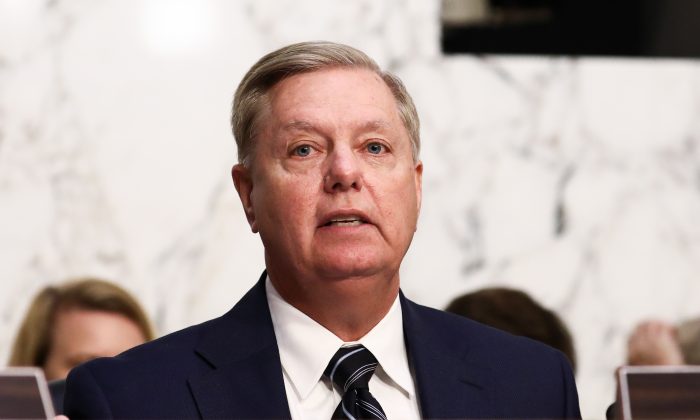 Senators from both sides of the aisle grappled with the question on how to address the practice of a single federal judge ruling beyond the scope of a particular case, in some orders known as nationwide injunctions, during a committee hearing on Tuesday.

In contrast, an average of 1.5 such injunctions was issued per year against the administrations of Presidents Ronald Reagan, Bill Clinton, and George W. Bush. Meanwhile, the administration of President Barack Obama faced about 20 nationwide injunctions—or an average of 2.5 per year—during its eight years, according to Attorney General William Barr.

Many of the nationwide injunctions issued against the current administration have targeted crucial immigration policies in dispute, preventing their application across the nation while the cases proceed through the courts. The Trump administration has repeatedly expressed concern about the unprecedented use of court orders by unelected federal judges to impose their own policy preferences across the nation. Similarly, the White House has repeatedly criticized this unprecedented use of court orders. Trump decried the impact of “judicial activism” on the nation’s security, society, and economy in a speech last year.

During Tuesday’s hearing in the Senate Judiciary Committee, the senators tackled the central question of whether congress needed to take steps to address the issue via legislation or wait for the courts to resolve it. They directed their concerns to a panel of experts, who shared varied opinions.

“I don’t know how to fix it, whether we need legislation or the courts can find a way to correct this problem, but somebody needs to fix it because I don’t think you can run the country this way,” committee chairman, Sen. Lindsey Graham (R-S.C.) said, adding that the orders are “creating chaos in our courts, chaos in policy.”

While Republican senators indicated that they were inclined to halt the practice, their Democratic colleagues defended the orders, saying that they could be used as a safeguard against executive actions or federal policies that could cause harm.

The top Democrat in the committee, Sen. Dianne Feinstein (D-Calif.), said nationwide injunctions had, for example, protected more than 700,000 recipients of the Obama-era Deferred Action for Childhood Arrivals policy, or DACA. She added that the act of balancing the competing interests would be difficult to achieve.

“I can see good in the injunction because it protects something done by Congress and signed by the president and that becomes law in our country, whether it’s DACA or any other bill, but if you try to balance it, I think it’s very difficult,” Feinstein said.

Sen. Richard Blumenthal (D-Conn.) noted that the appeals courts have been divided on the issue. He said that he sees the benefits of nationwide injunctions to provide redress to executive actions that appear overreaching. He suggested that the Supreme Court would be the appropriate forum to consider the criteria for assessing when a nationwide injunction should be issued, before asking the panel for their opinions.

“Maybe the Supreme Court, if it’s concerned and we’re concerned, ought to set rules rather than the legislative branch. Let’s be real here. We’re never going to have a really wise and definitive result from the United States Congress to this complex an issue,” Blumenthal said.

The experts provided a variety of views in response to the senator’s question.

Jesse Panuccio, a partner at Boies Schiller Flexner, said he believes Congress should exercise its legislative power to address the issue.

“On this issue … there may be room for a bipartisan solution because the nationwide injunctions have affected presidents and policies of both parties. It’s sort of an equal opportunity offender in terms of stopping national policy making,” Panuccio said.

Meanwhile, Solicitor General for the District of Columbia Loren AliKhan agreed with Blumenthal, saying that it was an issue that the Supreme Court should decide on because it arises in many procedural contexts.

“I think it would be legislatively very difficult to come up with a standard that incorporates all of those permutations,” she said, while adding that the Supreme Court has indicated that they are interested in reviewing this question.

On Feb. 21, Sotomayor wrote a dissent in one of the public charge immigration cases after the court voted to lift a nationwide injunction blocking a Trump administration rule. In her opinion, she criticized the administration and her colleagues for the “breakdown in the appellate process.”

“That is because the court—in this case, the New York cases, and many others—has been all too quick to grant the government’s ‘reflexiv[e]’ requests,” she wrote, adding that the court’s decision to grant the stays on injunctions “comes at a cost.”

Meanwhile, Gorsuch, joined by Thomas, raised concerns about nationwide injunctions in a concurring opinion, while granting the government’s request to lift on the same rule.

He said nationwide injunctions raise “serious questions about the scope of courts’ equitable powers under Article III” of the Constitution and have caused judges to make “rushed, high-stakes, low-information decisions” because this practice forces parties to “rush from one preliminary injunction hearing” instead of “spending their time methodically developing arguments and evidence in cases limited to the parties at hand.”

Thomas issued his own concurring opinion (pdf) in the landmark case, Trump v. Hawaii, which upheld Trump’s Presidential Proclamation 9645. The decision allowed the administration to enforce the refusal of entry into the United States of travelers from multiple “high-risk” Islamic countries.