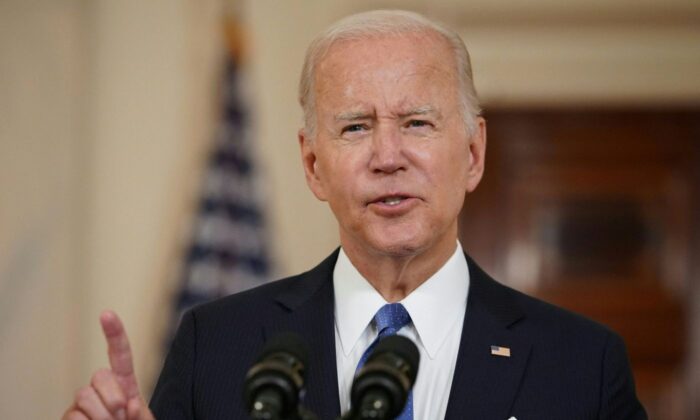 More than 30 senators requested that President Joe Biden use the “full force of the federal government” to stop states from preventing abortions after Roe v. Wade was overturned last week by the Supreme Court.

“We call on you to combat these attacks and take immediate action to use the full force of the federal government to protect access to abortion in the United States,” their letter states (pdf).

They continued, “There is no time to waste: nearly half of the states already had laws in place to ban abortion or severely restrict access as soon as the Supreme Court decision came down” and that “many states enacted those laws immediately, and at least a dozen are set to follow suit in the coming days and weeks,” referring to trigger laws and laws that were previously signed into law restricting abortions in a number of states.

On Friday, the Supreme Court in a 5–4 opinion argued that legislatures—not courts—have the power to pass laws to enable or restrict abortions. Writing for the majority, Justice Samuel Alito noted that the Constitution contains no references to abortion.

“We end this opinion where we began. Abortion presents a profound moral question,” he wrote, in part (pdf). “The Constitution does not prohibit the citizens of each State from regulating or prohibiting abortion. Roe and Casey arrogated that authority,” referring to the 1992 decision, Planned Parenthood v. Casey, which was also struck down Friday. “We now overrule those decisions and return that authority to the people and their elected representatives.”

But the 34 senators claimed that the ruling, which essentially gives states more rights, “is dangerous and horrifying and it will endanger women’s lives. We cannot stand idly by as Republicans rip away women’s rights. And we know they will not stop with this decision—they are already eyeing a national abortion ban.”

Before the Supreme Court’s decision, Biden in a televised interview with late-night host Jimmy Kimmel, suggested that he could use executive orders to target abortions. His remarks came after a draft opinion that signaled Roe v. Wade would be overturned was leaked to Politico.

“There’s some executive orders I could employ, we believe. We’re looking at that right now,” Biden said, without elaborating. “If … the decision comes down the way it does and these states impose the limitations they’re talking about, it’s going to cause a mini-revolution and they’re going to vote a lot of these folks out of office,” he also said.