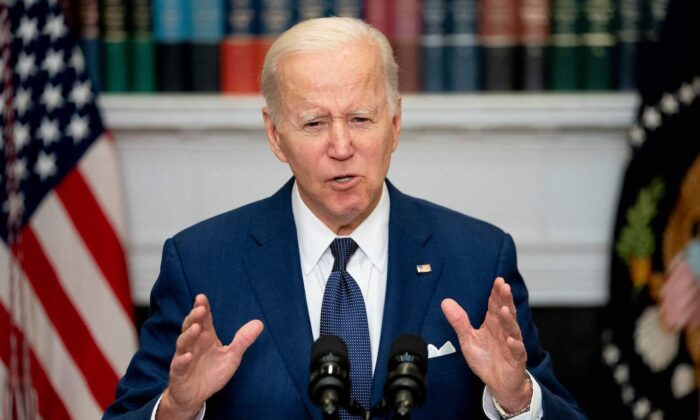 President Joe Biden delivers remarks in the Roosevelt Room of the White House in Washington on May 24, 2022. (Stefani Reynolds/AFP via Getty Images)
By John Ransom

Increased federal spending under President Joe Biden has created a dangerous environment that resulted in growth that can’t support the cost of the national debt, say analysts and lawmakers.

The result has left some experts and conservative politicians to question whether the stimulus measures taken under Biden and the Democrats can be justified as the burden of servicing the debt has suddenly become onerous, an eventuality that some have warned against previously.

“I’ve been warning Americans about Biden’s Inflation Bomb spending agenda from the beginning, and now every American is paying for it,” Senator Mike Braun (R-Ind.) told the Epoch Times in a statement.

“In Fiscal Year 2021 we threw away $562 billion on nothing but debt service—that’s 72% of what we spent on defense that year,” added Braun.

It’s not just politicians who sounded the warning bell over the Biden spending binge.

Economists have pointed out that if stagflation—high inflation plus weak economic growth—gives rise to an increase of interest rates then the government could have a full-blown fiscal crisis on its hands.

“Given the comparative certainty of these large federal budget deficits—which will make budget interest costs extraordinarily sensitive to even small interest-rate changes—it would be reckless to commit to decades of permanent new debt in the hope that the interest rate paid on this debt never again reaches 4% or 5%,” warned economist Brian Riedl of the Manhattan Institute think tank in December.

Riedl’s main worry was that if economists were wrong about interest rates staying under 2 percent, because the new spending created inflation instead of growth, and with it, higher interest rates, then the government has no “backup plan.”

And that’s exactly the scenario facing Washington today, although already the interest rates changes haven’t been small, but rather large and getting larger.

But most importantly, the extra money has failed to produce any economic benefits.

“Joe Biden’s own administration admits his policies are driving the economy into the ground putting the United States at risk of a recession, and yet Biden digs the economic hole for families deeper and deeper,” Sen. Rick Scott (R-Fla.) told the Epoch Times.

To some, it’s clear that this time around the Democrats have overstimulated the economy, using COVID-19 as an excuse for spending programs that have produced little economic results

The unnecessary fiscal spending has put the U.S. economy at high risk of stagflation.

The result has been that the Federal Reserve Bank’s real-time forecast of GDP has continued its downward slide in the second quarter, after GDP posted negative growth in the first quarter.

The second quarter started with forecasts in the upper range at 4-5 percent GDP growth, according to the Federal Reserve Bank’s Nowcast model.

But recent updates say that thus far the quarter will produce below 2 percent growth, with a month left for the quarter to grow worse.

And more rates hikes are promised, according to Federal Reserve Chair Jerome Powell.

“We will go until we feel we’re at a place where we can say financial conditions are in an appropriate place, we see inflation coming down,” Powell told a live audience at an event hosted by the Wall Street Journal on May 17.

As Treasury yields go up, so does the amount of money the government has to pay annually just in interest payments.

The Changing Face of Stimulus

In the beginning of May, the General Accountability Office (GAO) issued a report that warned that previous of patterns of stimulus has shifted, with dire consequences to US economic health.

According to the GAO report, previously economic stimulus measures had been reserved for short-term emergencies like war-time or brief recessionary periods.

“For most of the nation’s history, the government’s debt as a share of Gross Domestic Product (GDP) has increased during wartime and recessions,” said the GAO report.

“It has typically decreased during times of peace and economic expansion. However, this pattern has changed during more recent times,” the report added.

Around 2002, the pattern shifted a bit and then went into overdrive in 2010 even as the country began to enjoy modest growth after a brief recession.

“GAO’s latest report on the nation’s fiscal health paints a sobering picture. Without substantive changes to revenue and spending policy, the federal debt is poised to grow faster than the economy, a trend that is unsustainable,” said Gene L. Dodaro, Comptroller General of the United States and head of the GAO.

By 2050, the GAO estimates that over a quarter of all government spending will be doled out just to service debt, while total federal spending will make up nearly half the economy, compared to about 20 percent of the economy today.

A private economist at JP Morgan, the largest bank in the United States, said the size of government debt probably offers no near-term threats.

“However, servicing the debt will become more onerous over time, limiting the ability of the government to increase spending or cut taxes,” said Dr. David Kelly, in a note to JP Morgan clients.

Braun, however, warns that the pain is near-term and threatens the economy and the security of the US, especially if the spending binge continues.

So far the numbers back him up, not JP Morgan, he argued.

“By 2029 we’re expected to spend more on covering our debt than we do on the military – and now Biden’s so-called COVID relief and infrastructure bills are adding to this number and hurting every American family,” Braun said.

Most importantly, there doesn’t seem to be a recognition by the president just how dangerous conditions are for a country already dealing with a COVID recovery that’s haphazard at best.

In some ways, it almost seems like Democrats think that economic results are optional when spending federal money, say some critics.

“Our nation is $30 trillion in debt, but Joe Biden has no plan to balance the budget, grow the economy, fix his self-imposed inflation crisis or get America back to work – his only ideas are higher taxes and more spending that will drive our debt to $45 trillion,” said Scott, echoing prior concerns of economists on the debt time bomb.

“Biden is clearly unfit, unwell and incompetent,” added Scott, who was blunt about what is needed to fix things.

“The best thing he can do to fix the inflation crisis and the American economy is resign,” Scott concluded.

The Epoch Times has reached out to the White House and House Speaker Nancy Pelosi’s office for comment.